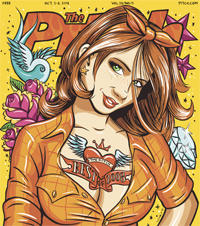 Kansas City With the Russian Accent

Kansas City With the Russian Accent, at kcmeesha.com, is the Web journal of a Russian Jewish expatriate who came to Kansas City in 1992. Meesha V. outwrites half the local native-English-speaking bloggers and outcharms most of the others with an original voice and smart, funny asides and observations that could occur only to a cultural latecomer. It doesn’t hurt that the anonymous author kicked off the first entry with jokes about the Iron Curtain and a repudiation of deeply unfunny Russian comic Yakov Smirnoff. Documenting life in Kansas City, Meesha also tells some pretty harrowing stories about growing up during the Soviet era, including the anxiety and fear he confronted during his mandatory induction into the Russian army at age 18, waiting to find out if he’d be stationed near his home or sent to Afghanistan. With one foot in the metro and one in Rossiyskaya Federatsiya, Kcmeesha.com is Kansas City’s best blog this year.

Wow! I am at a loss of words (it’s not that hard for me). I didn’t know that I was even being considered. I am not going to deny that this was a pleasant surprise. I don’t really think I am the best; it’s just that while much better bloggers switched to twittering one-liners I am still here typing away, mostly because I am too cheap to pay for the internet for my phone. I would like to thank many people who read this blog and especially the ones who collectively left over 1,700 comments over the past year. I know it’s not that many and The Readers’ Choice Best Blogger TKC (Congratulations, Tony!) gets that many in a day, but I appreciate every one of you who took the time to comment, participate in a poll or a caption contest, thanks for not being anonymous. I would like especially to thank XO because this site is more or less an extension of my comments on his blog almost a year ago. Many other bloggers who are linked here and even more in my Reader serve as the daily inspiration and also as my imaginary friends. Meeting and corresponding with many of you over the past year made worthwhile all the time that I spend in front of my laptop, 10 lbs of gained weight and no personal life.

This honor just goes to prove that the American Dream is still there for anyone who wants it, it just changed a little. Yes, I got here dreaming about owning a mansion, nice cars, maybe a yacht with a beach house and a small private plane; I got none of these things, and yet I can’t complain: having all this would have made me just another one of many rich people with awesome, care-free, amazing lives full of leisure, travel and entertainment. Instead, I am one of a few, but few of the best.