I knew there was a post somewhere on this blog about the Russian pancakes made with Farmer Cheese for which I coined a term cheese-niki, but when my sophisticated gastronomical friend Katrina posted a recipe on her blog, I thought it was time to revisit the subject.

There must be some unfortunate reason why the American people are being deprived of multiple milk products. Kefir is only now becoming widely available or even known to many people, there is probably one lonely brand of Farmer Cheese, and such delicacies as baked milk and ryazhenka are mostly unheard of outside of the Russian store. In light of the aforementioned shortages of common ingredients I had to adapt my recipe to whatever is available on hand. Yes, there are ways of making Farmer Cheese at home, but as my daughter would gladly tell you – I am lazy, and all my cooking is based on the least possible amount of work and clean-up.

For this recipe you’ll need a 32 oz tub of the all-natural plain or vanilla yogurt, 1 egg, about a cup of flour, a small amount of salt and baking soda, sugar, and optional vanilla and raisins, craisins or whatever else you might like. You will also need cheesecloth, which is widely available at most grocery stores, craft department at Walmart, kitchen stores and elsewhere.

When buying yogurt look for one with the least possible amount of ingredients; the one I used had just one ingredient -milk. I usually pick a large container at Walmart where it only costs around two dollars. Other yogurts contain fillers, white paint, super-glue and other fine ingredients, but while it may be OK to eat, I have no idea what will happen when you try to cook with it.

The night before you want to cook pancakes (or few nights, if you are a long-term planner), strain the yogurt. The way I do it is to cut a piece of cheesecloth large enough to cover a colander when folded in two. Then I cover the colander with two layers of cheesecloth, empty the yogurt container into it, tie the ends to create sort of a pouch and hang it overnight to drain. 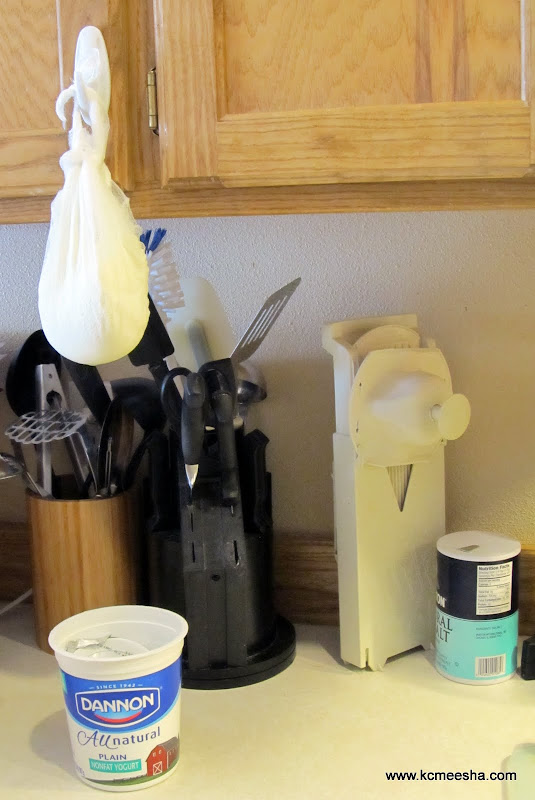 Make sure to use the container to catch the whey. In the morning you will find out that almost half of the container is filled with liquid. I throw it away together with the cheesecloth (which can be washed and reused if you feel like doing it). 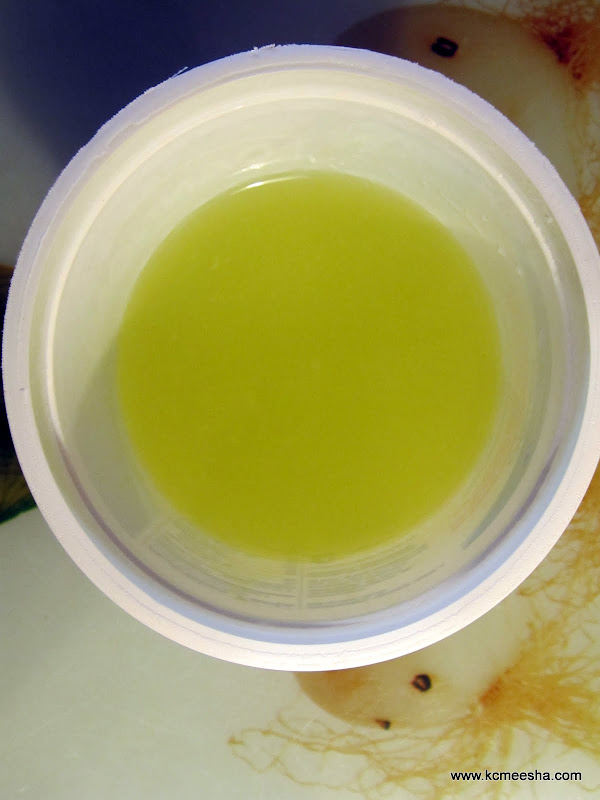 What’s left is a quick substitute for the Farmer Cheese. 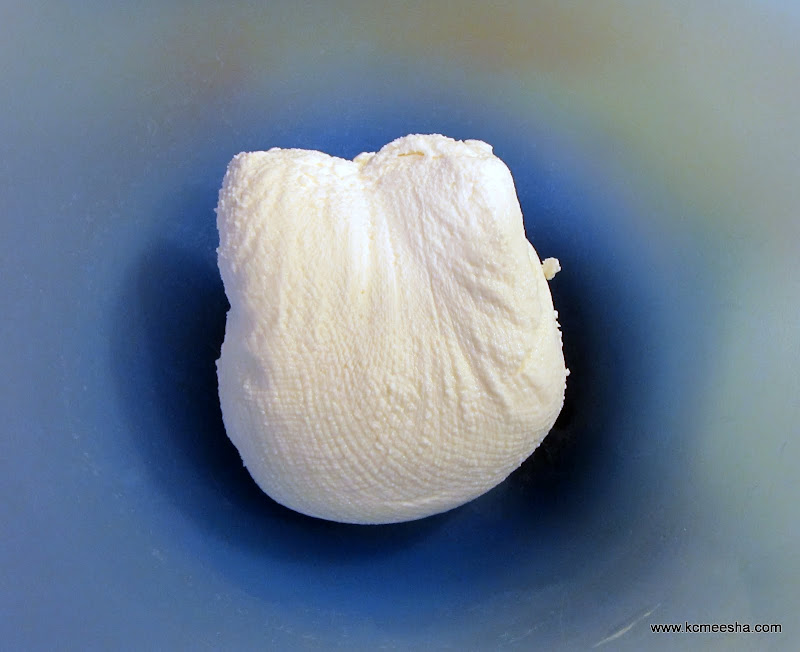 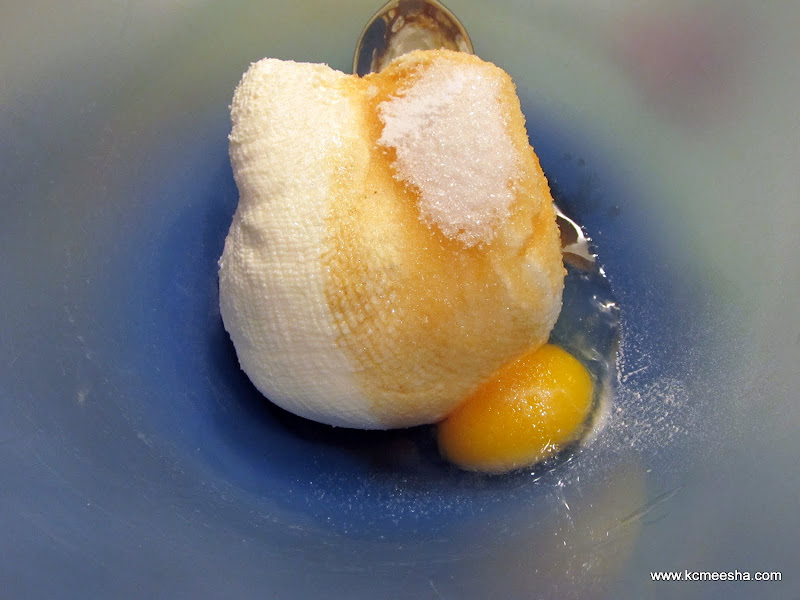 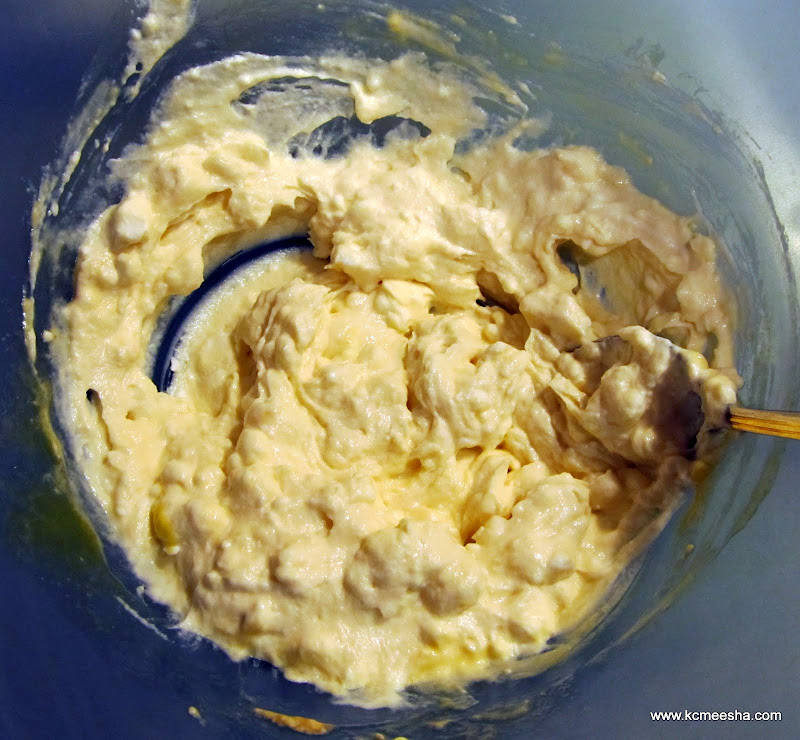 The amount of baking soda determines the puffiness of the pancakes. If you like them fluffy – add a little more, if you like them dense – a little less. I usually add sugar to taste, if you add too much, your pancakes will burn easily, but don’t be skimpy – you don’t pour syrup on these, so they should be sweet on their own. Adjust the amount accordingly if you used sweetened yogurt and if you are planning to add raisins.

Add and mix in the raisins. 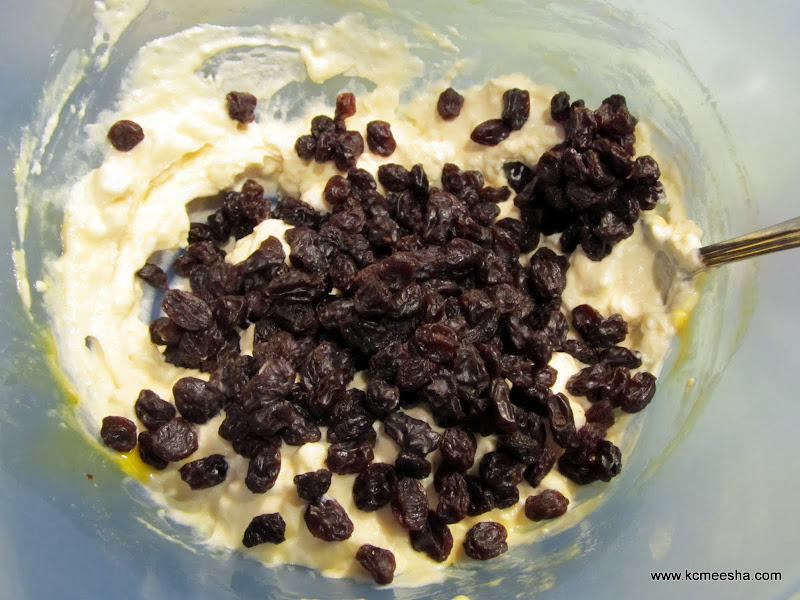 In my house we like a lot of raisins. Our pancakes are about 80% raisins and 20% other things to hold them together. You don’t have to go raisin-crazy, put as much or as little as you like.

Add flour. I usually add about a cup, the mixture should be still pretty sticky and moist. 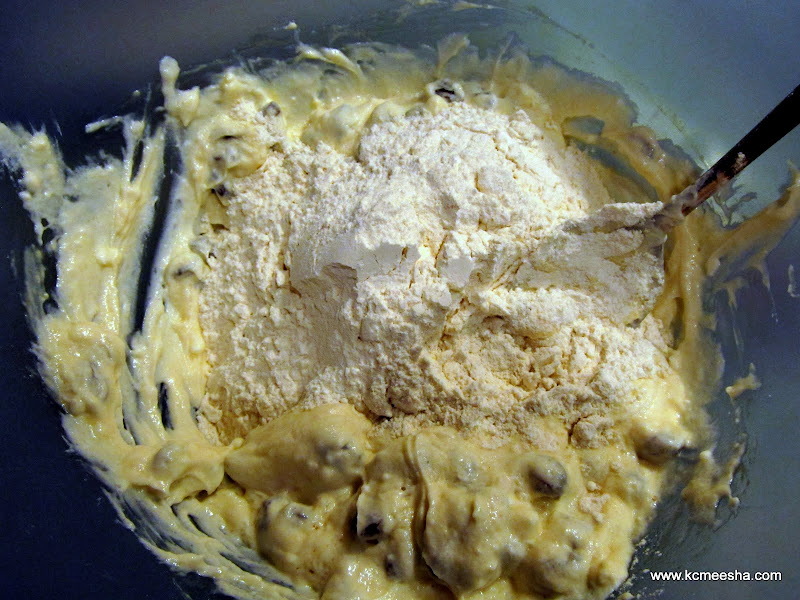 Mix everything and you are ready to go. 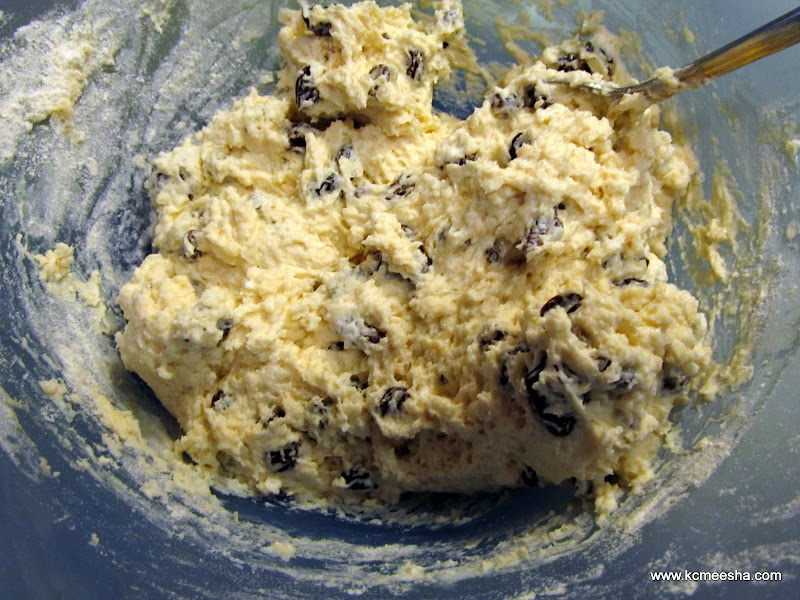 Now, if you weren’t lazy, you’d pour a little mound of flour on a flat surface, drop tablespoons of mixture into flour, then roll and shape them into beautiful ovals flat on top and bottom. Right…

I drop tablespoons of mixture straight into the skillet with some cooking oil, heated up on a medium-low and flatten then up with a spoon. 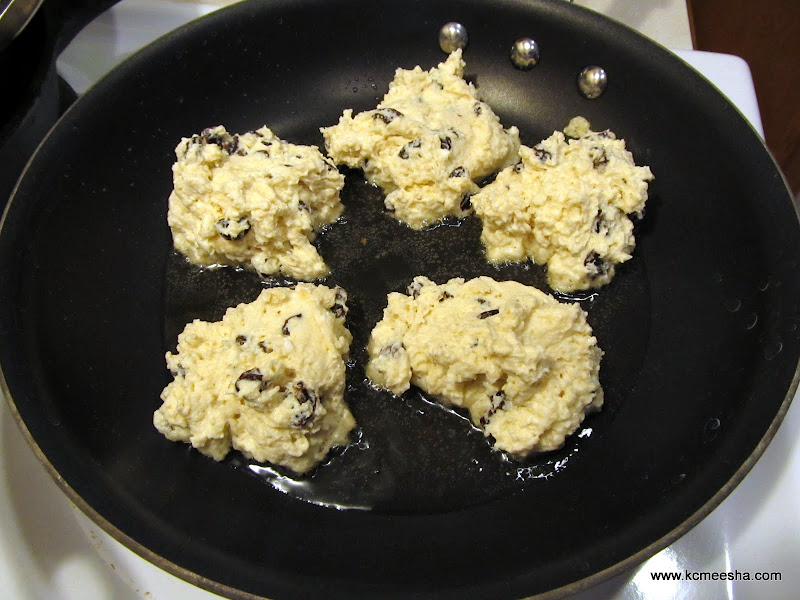 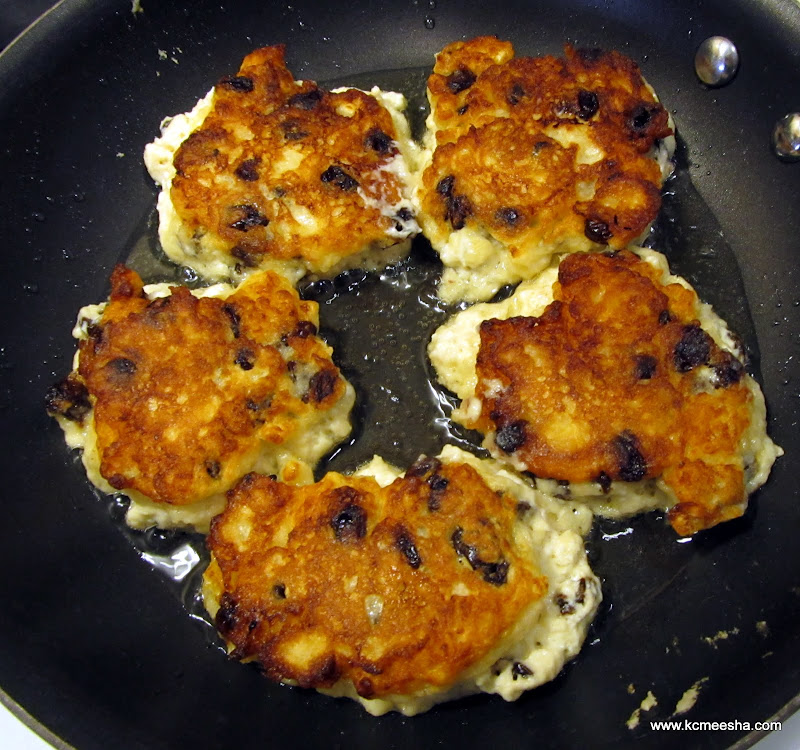 …and they are ready. 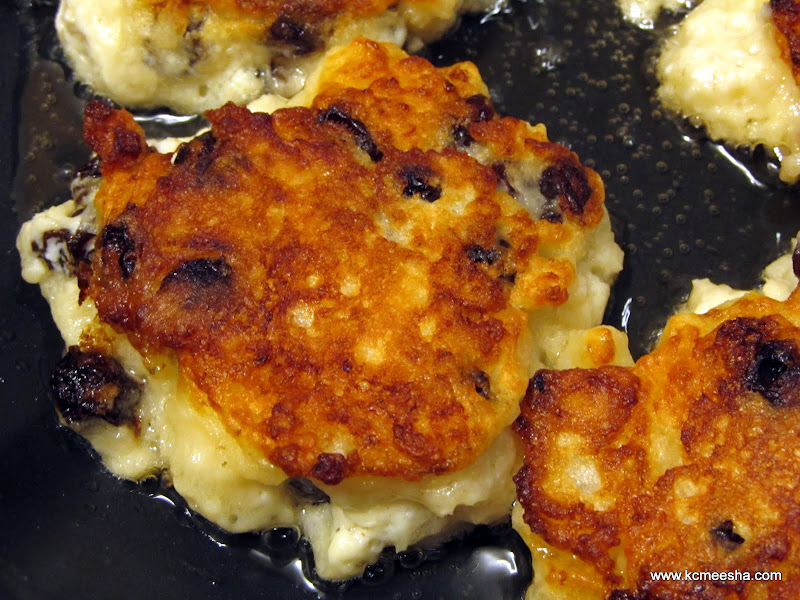 Remove to a paper towel, wait as long as you can and eat. Some people like them with sour cream, fruit preserves or honey. We just eat them plain. 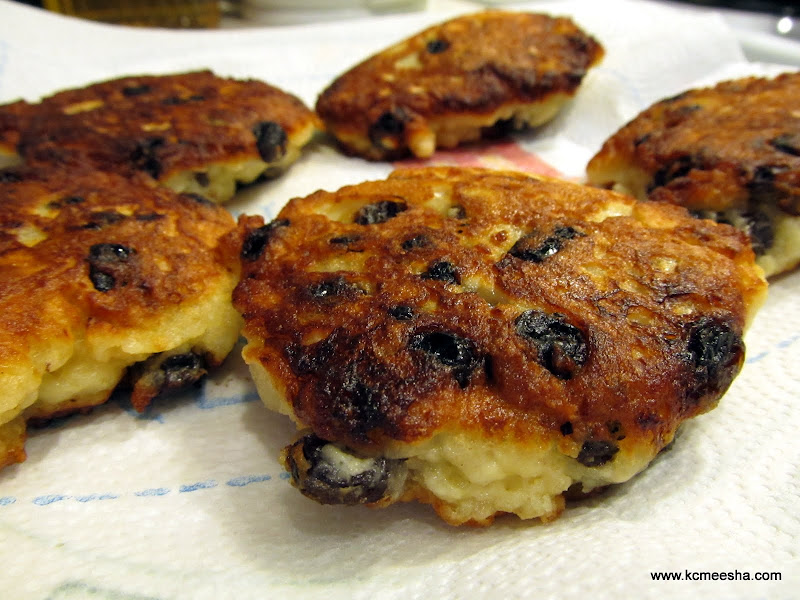 Notice that after all this cooking I had one dish, one plate, one spoon and one skillet to wash. That’s what we call efficiency.

And now we dance!