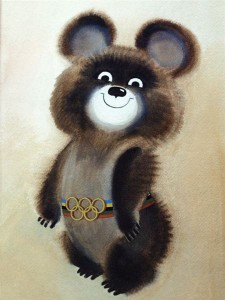 For a person with a surprising and painful lack of childhood memories I seem to remember a lot about the Moscow Summer Olympic Games of 1980. I remember where I was at that time and remember watching the games on a 12 inch black-and-white TV. Since the 1980 Olympics were boycotted by the USA and and over 60 other countries some of you may be seeing the clips below for the first time (and some of you were born after 1980). Boycotting Olympics is a tragic event for the athletes, some of whom may only get one or two shots at competing in the Games in their lifetimes. Moscow Olympics were not an exception, we will never know what the results would look like if all of the countries were participating. Nevertheless, for the Soviet people (especially in Moscow) the Olympics became a two week window when they got a peek at the West and they liked what they saw. The USSR went all out to impress the rest of the world, no expenses were spared, only the best was to surround athletes and the guests in order to show the superiority of the Soviet regime. For years after the Games people were wearing jackets with the Olympic emblem on it and the Olympic Bear is still recognized by most people. Not only the people in the stadium but the whole country cried when the Bear took off during the closing ceremony. I haven’t see one more touching ever since.