Behind the Iron Curtain: Portyanki 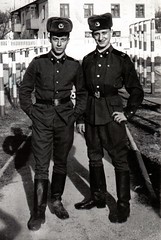 Memory is a strange thing. One minute I am reading a story about outpatient surgery in prison and the next minute it takes me back about 20 years when I was sitting in a small army hospital room and another soldier, who was supposed to be a nurse, was poking a scalpel at the infected cyst on my own foot. But this is not about some gruesome sadistic surgery forced on a newly drafted Soviet Soldier, although I still have a scar to show for it. This is a post about portyanki – a foot wrap worn in the Russian and later in the Soviet army instead of socks until just a year or two ago.

After a long and tumultuous day of saying good-byes to civilian life and traveling by train and then inside a truck in the dark, lining up, multiple counts, marching with a group of half-scared schmucks and finally arriving at a place where most of us will spend the next two years, our group of fresh draftees finally settled down for an uneasy night of exhausted sleep. In the morning we were to shed whatever else connected us to our previous lives and become bona fide soldiers in the Soviet Army. After watching in horror other soldiers jump off their bunk-beds and stampede to their morning exercise routine we proceeded to the warehouse to receive our uniforms. The Soviet military uniform changed very little since WWII 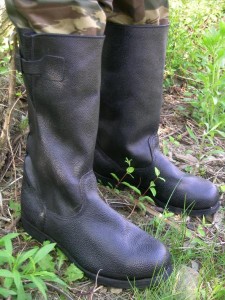 and there were always rumors of giant stashes of old uniforms sitting around waiting for the time “when enemy strikes”. The boots were the heavy non-laced kind from some fake leather material called kirza (sometimes translated as canvas, I am not exactly sure), uncomplicated by lining or any other comfort features.

There were no socks, instead we received two pieces of cloth about the size, shape and thickness of a tea towel (13.6 by 35 inches) and some vague instructions about how to put them on. Given the quality of boots and the fact that this was the only kind of footwear for all occasions except for the rare weekend off, portyanki were not such a bad choice. What we didn’t realize was that putting them on correctly was an art, mastering which for most people required persistence, patience and a lot of foot damage. Another useful but unavailable at that time piece of information was that although the boot may have felt tight at first, getting a larger size was a big mistake. After some trial, error and confusion I ended up with a new uniform, two portyanki and a set of boots one or two sizes too large. Everything seemed to be OK until my first 10K run in full gear. During my whole life before that day my cumulative running distance equaled to about 10 or 20 kilometers. Needless to say that I crawled back half-dead with my portyanki bunched up inside my boots and a big bloody blister on one of my feet, which then got infected, blossomed into a big cyst and brought me to the scalpel wielding failed medical student from the beginning of this post. For the next two weeks one could tell inexperienced portyanki wearer by his distinct limp and walking around in slippers instead of boots. I almost had to wear slippers to my swearing-in ceremony but after the infamous surgery I recovered enough to fit in the boots again.

I could go on and on about portyanki, about the summer and winter kinds, about the smell when everyone aired theirs at night (laundry was once a week), or about how I eventually mastered the art of putting them on and wore them until I was discharged even when I was allowed to wear normal socks. They were comfortable in the end, easier and faster to put on, warmer in winter and cooler during the summer. When I see American soldiers running around in sneakers I smile to myself: what a bunch of pussies! (I am kidding, do not write me threatening comments). For those of you who don’t believe me here is a short instructional video. And that’s, my American friends, how we won the cold war!