Some day I will go out to get lunch and come back dead or it least in a “critical but stable” condition. That’s because unlike the local lunch-reviewing icon who eats in the safety of Johnson County,I have to forage for food around the war zone a.k.a. Independence Ave. Its unpredictable mix of ethnicities, poverty and crime make every lunch trip an adventure.

I am not sure where I ate today. I can see the place on Google Street View (it’s the white storefront to the left of the barber shop).

View Larger Map
I think it was called “Yasmine Cafe” but I can’t find it in the Yellow Pages, Google and anywhere else. This trip started few days ago when I noticed a sign advertising shish-kebab while driving around looking for Mexican food. Today I came to work with a thought to try some middle-eastern cuisine. I drove to the place and walked in. 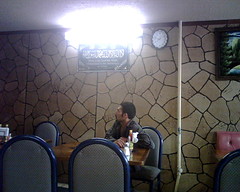 Small clean room with a few tables and booths and no signs of food, decorated with a TV with some Arabic channel, few paintings and a sign that Muhammad is the messenger of Allah. Three guys hanging out in the dining room, watching TV. By the way, on Arabic TV the ticker at the bottom of the screen is moving in the opposite direction.

I started to feel like Jimmy Carter on his way to talk to Hamas, except that he is not Jewish. I asked one of the guys if there is any way I can get some food to go, so one of them went to the back of the building and retrieved a nice guy who could speak English. I asked about food again to which he smiled and said “Do you want to know the menu?” and proceeded to make up and recite the menu from the top of his head. I recognized some items and ordered shish-kabob, rice and salad, and he also offered to get me some soup just to try. I asked him how much this would cost and after minor hesitation he said that he will give all this food to me for 8 dollars. I watched Arab TV for about ten minutes, they were talking about NYSE, probably enjoying the oil prices. Then a group of men walked through the building and all greeted me with As-Salāmu `Alaykum, I actually knew the reply (wa `Alaykum As-Salām) but decided to limit myself to diplomatic shaking of hands. I got my food, paid and left.

The food was actually pretty good and there was so much that I split it in two decent size lunches. I also got a 16 inch flat bread to go with it. I didn’t really like the eggplant soup, it was to acidic for my taste. The rice had some vegetables in it and even a few raisins and was light and tasty. Kebabs were grilled and meaty. Salad had cucumbers and lettuce, nothing weird. If anything, I expected the food to be a little more spicy, but a co-worker who spent some time in the Middle East confirmed that it was pretty close to authentic.

I am not sure if I’d recommend this place with no menu and all, try it at your own risk. I am still alive so food quality is not substandard. So just like Jimmy Carter, I am not only eating lunch, I am also improving Jewish-Arab relations, one kebab at a time.