Behind the Iron Curtain:Young Pioneer Organization of the Soviet Union 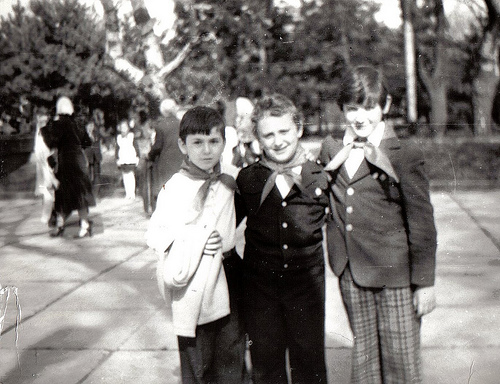 In the USSR May 19th was celebrated as the “Pioneer Day”. Pioneers were the members of the Young Pioneer organization of the Soviet Union, which was a second step in the official Soviet brainwashing pyramid. After a general but unorganized brainwashing from ages 0 to 7,a child entered the first stage of the pyramid by becoming a Little Octobrist. By age 9 being a Little Octobrist wasn’t cool and exciting anymore and kids were looking forward to joining the Young Pioneers. Pioneers wore red ties. They went to summer camps. They had meetings. They were cool. Or so it seemed. I was honestly looking forward to the day when a red tie would be tied around my neck. I really didn’t care about the communist b.s or stories about wise grandpa Lenin, by 1979 I didn’t know anyone who did. Most kids just learned to repeat what was expected of them and move on. Nevertheless, for many of us the day when we were accepted into the Pioneer Organization was a long-awaited holiday. We just wanted to be like older kids and that day couldn’t come soon enough.The picture above was taken on that day in 1979 when we were finally accepted. Joining the Pioneers required some preparation. We needed to know the motto, the rules and, most importantly,…in the presence of … comrades solemnly promise: to love and cherish … Motherland passionately, to live as the great Lenin bade us, as the Communist Party teaches us, as required by the laws of the Young Pioneers of the Soviet Union. Long-time readers of this blog would notice that the ceremony was conducted near the Monument to the Unknown Soldier to make it more solemn and memorable. What made that day even more memorable for me was an afterward trip to the Odessa Catacombs – a series of underground tunnels which during the WWII housed the underground (literally) resistance unit and in peaceful time – a museum. Part of the tour included walking through the tunnels with candles imagining yourself being a partisan. I don’t know about the partisans, but upon the exit I realized that my new pants were completely covered with melted wax, which my Dad had to iron out for a long time. By the way, while writing these posts I discover a lot of stuff I didn’t know before, like the real story of the catacombs which was very different from the official version. With years red tie went from the object of pride to just a dirty wrinkled patch of silk to a dark place in a pocket of the school uniform. The next step was joining the Komsomol, but that’s the subject of another story.