Behind the Iron Curtain: Lenin’s Birthday 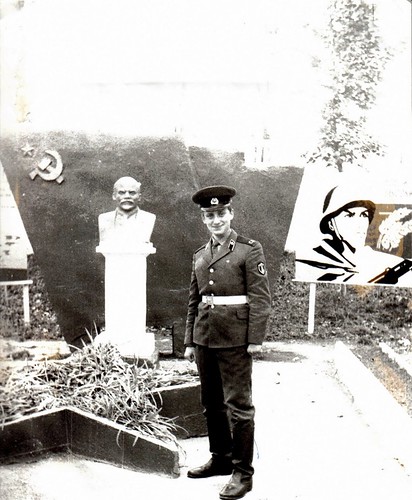 Today, on April 22nd all progressive humanity celebrates the n-Th birthday of the Leader of the World Proletariat, founder of the USSR and the Communist Party of the Soviet Union Vladimir Illyich Lenin. Something like this would make a traditional headline in every newspaper in the USSR as recently as twenty years ago. For years Lenin’s likeness was everywhere, every classroom had a portrait, every school had a bust, every city had a monument or ten, and then there were countless pins, flags, medals, certificates, photos, paintings and other visual aids. On this picture I am posing with Lenin in the parade uniform which I had to borrow because I was too lazy to sew the badges onto my own. In my day, Lenin was not as revered as he was in years before, but we still had to read the stories about his childhood, his love for the common men, his wisdom, his humbleness, his bravery and genius. We didn’t care but it was something that had to be done. As we grew up he was growing up with us, from “Grandpa Lenin” to “Comrade Lenin”, always omnipresent, always watching us from every wall and every city square. Stories of his childhood were replaced by his works that we had to study and quote. Every respectable establishment would have all 55 volumes of his “Collected Works“,which were lovingly translated into every language known to man.We didn’t know about “Red Terror“, hunger, repressions, killings,murder of the Romanov family; people who remembered knew better not to discuss it, every mention of the horrors wiped out or edited to look necessary to establish and protect the new country. Just a kindly old man who cared about us.
No one knows how the world history would have turned out without Lenin. Probably the same. Lenin wasn’t the one killing, robbing, kicking out of the country, starving and raping. He was just issuing the orders.

His body is still out there as a morbid reminder of his genius, evil and determination, a lethal combination which affected billions of people in every corner of the world for generations to come.