How To Seduce The Woman Of Your Dreams

And God blessed them, and God said to them, Be fruitful, and multiply…
Genesis 1:28

Evolution is a great thing. In a world without evolution only beautiful people would be able to reproduce and the Earth would be populated with the clones of Fabio (or as someone admitted – John Edwards) and Julia Roberts. Enter an unfortunate  side-effect of the looks-based-reproduction, namely a gradual lowering of the worldwide average IQ. Here is where the evolution came up with an ingenious solution of supplying the below-average-looking fat males with small genitalia with a an amazing tool-set for seducing beautiful women of their dreams who otherwise wouldn’t even grant such males a second look.

My non-existent love life automatically makes me an expert perfectly qualified to write the following article. If you are a good-looking male, with a perfect body and an award-winning penis, this is how far you should read. I am pretty sure you are starting to get a headache from all the big words I’ve used so far. You’ve won in the genetic lottery and your existence assures that all of the mankind doesn’t look like me. Thanks for being there for us, go do a few crunches or something.

We can now continue without that one douche-bag who just left. Males of many species have different ways of attracting the most beautiful and unavailable females; from peacock’s tails to the giant deer antlers, the natural world is full of examples of males getting what they want when otherwise they wouldn’t have any chance. Just like our smaller brothers we have some things we can use to inject our ugly but smart DNA into the human gene pool. These do not require any special effort, like exercise or diet; you probably already have some or all of them as you read this.

1. A foreign accent. Contrary to popular belief, a foreign accent is not a handicap. In the love game it’s probably one of the best assets you can have. Accents drive women crazy and sometimes just after a few words she will do anything to hear more of your randomly swapped v’s and w’s or, even better, a whole word in your native tongue.

Few words of warning on the accents: two similar accents cancel each other out. If you are both from Australia, all the talk about shrimps and barbies will not turn her on. On the contrary, the other person’s accent becomes annoying and embarrassing. Another note of caution: if your accent makes you sound like Larry The Cable Guy, you better have his kind of money to be able to seduce the woman of your dreams unless it’s Nancy Grace.

2. Learn to cook something from scratch. To impress a woman you don’t need to be a Wolfgang Puck, you just need to be able to cook something she’ll like preferably without using any recipes you got from watching Semi-Homemade Cooking show on the Food Network. Whether it’s a steak, a hamburger, fried chicken or borscht, it’s the process and your skill that will fascinate her, so Shake’n’Bake wouldn’t do the trick. Cooking may also include baking or cocktail making. Anything that only you know how to make will get you closer to the target.  However, don’t go too wild unless you know who you are dealing with; she may not appreciate your Coq Au Vin but may be pleasantly surprised with Chicken and Dumplings.

3. Get a pet, and by a pet I mean a cat. Dog will not allow you to leave for those romantic long weekends and will interfere with you enjoying your morning together. Other pets may be scary, disgusting, annoying or smelly. On the other hand, virtually every woman loves a cat, and will come back to your house repeatedly just to scratch your cat behind the ear. Placing a cat photo such as this anywhere in your dating profile pretty much guarantees you a constant stream of “icebreakers”. 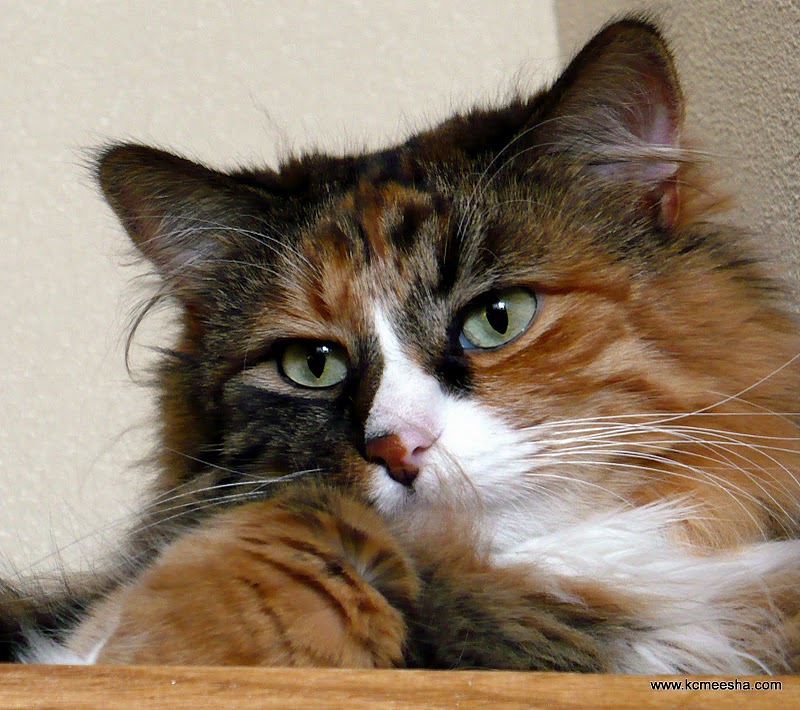 4. Poetry. That’s right, a poem will make your woman’s heart melt. You don’t need to be Walt Whitman, start with something simple and romantic like:

Roses are red,
Violets are blue.
I am here naked.
Where the hell are you?

If you want to impress her even more, haiku is the way to go. I am at a disadvantage in this department since I can’t count syllables, but it doesn’t prevent me from faking it. Just make sure you always have three lines:

Writing haiku is hard,
but I try
for the hell of it.

5. Get some title or an achievement, for example you can become the Best Blogger ever or get a PhD in some obscure subject. Published works, books, photos in the local newspaper, sex tape, whatever it takes to pique her interest.

6. Impress her with your knowledge. Be careful not to bore her with a discussion on pros and cons of various Linux distributions, comic heroes and their superpowers, or some special maneuver you use to beat a game on X Box. Instead you can impress her by knowing the capital of New Hampshire, or pointing out the difference between a crocodile and an alligator.

To summarize, if you are short in all the wrong places, fat and ugly, not all is lost. Just use your accent, skills and pets to seduce the woman of your dreams and remember: it’s survival of the fittest, not necessarily better-looking.