Behind the Iron Curtain: Prison Tattoos 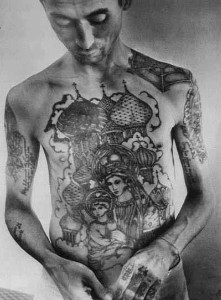 I you’d like to find out what’s going on in American prisons you have two choices: commit a small crime or read the best-selling Prisons For Dummies series. It’s a lot harder (but not entirely impossible) to get yourself locked up in a Russian correctional institution, so for the only other practical choice I recommend renting the documentary Alix Lambert’s The Mark of Cain. The film crew seemed to have unlimited access to prison facilities and inmates (they are called “ZK” in Russian jargon) which resulted in many candid interviews and interesting inside footage. While the movie starts off as a research in prison tattoos, their meaning and role in prison life, it goes on to describe living conditions in said prisons, which make some American lock-ups look like a picnic in a park, albeit with bars on windows and barbed-wired fences.

When I was growing up© the legends about prison life were passed from person to person. Everyone seemed to know somebody whose uncle’s cousin served time or something like that. Prison life wasn’t idolized, we all knew it sucked, but at the same time it had a touch of a legend. I can draw a loose parallel to Jesse James: he was a bloody murderer but somewhat a celebrity at the same time. We knew about tattoos and how a person could get killed for drawing something that wasn’t appropriate for his prison ranking. (The movie actually mentions that there were known cases of tattoos being cut off with the skin.) We heard prison songs, it didn’t matter to us that some of the singers had never seen prison in their life. The songs were sad and hopeful, remorseful, defiant and we all knew them. Tapes were copied thousands of times and sold or passed around. Large part of Russian pop-music still sounds like old prison songs.

You can find some information about the Russian prison tattoos online and in literature, but if you don’t mind subtitles I recommend you take a look at the movie for a quick intro

By a strange coincidence – another tattoo-related post from XO on the same day when I was watching the movie.