Behind the Iron Curtain: May Day 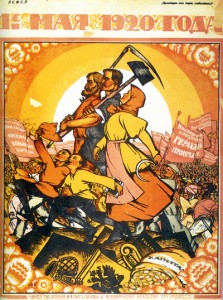 By the time I was growing up, the International Day of Worker Solidarity celebrated on the 1st of May became just another day in a long weekend of partying, spring outings, camping trips and fun. May Day usually started with the demonstration, the biggest one of course in Moscow, attended by the Politburo of the CPSU with the General Secretary himself, broadcast for hours on all three TV channels. Each self-respecting city had a smaller version with the local Party bosses in charge. During my years in technical school I’ve participated in one or two demonstrations. We were issued some uniforms and signs and walked with the crowds through the central streets of my city. Although the event was mandatory, we were happy to oblige, sixteen-year-olds don’t need much to entertain themselves in a crowd. So the smiles you see in the clip below are genuine, however, I highly doubt they have much to do with the world proletariat and their solidarity. “Workers of the world, unite!”

The text on the poster is “May 1st 1920″ and on the bottom ” Through the debris of capitalism to the world brotherhood of workers”.