Recently a set of photos taken at the Kansas City’s Wonderland Arcade in the late 1960’s made rounds on the Internet. These photos are stored at the National Archives in the file “Wonderland Inc. v. United States of America, 1968 – 1968”. The National Archives allows searches but not direct links or bookmarks, so you will have to enter your own search terms.

The Arcade located at 1200 Grand from the 1940’s to the early 1980’s was covered in the press numerous times, like this Billboard Magazine article: Wonderland Arcade Good Model of Well-run Amusement Center published in 1946, when The Billboard was still an amusement industry trade magazine.

Same magazine in 1947 informed about the time when the Wonderland Arcade was robbed of $150 in nickels, some of which was spent on a “new suit, shoes and a tour of the city by taxicab”.

And you would be hard-pressed today to correlate a polio epidemic, beer shortage and the arcade business like this article in the 1946 Billboard. 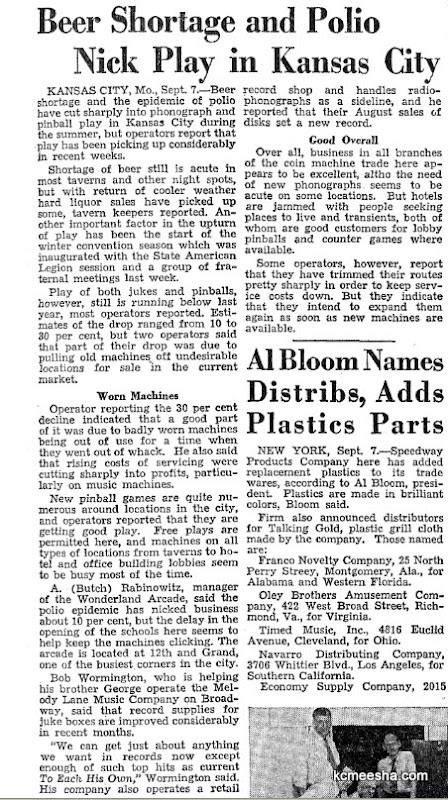 During the World War II, the Arcade entertained the servicemen passing through Kansas City. This 1944 Life Magazine article tells the story:

Kansas City’s Wonderland rakes in as the coppers and servicemen have fun.
The 1,500 penny arcades in cities and towns all over the U.S. are enjoying a pleasant boom. It results mainly from the present of itinerant servicemen who have time to spend between trains or on short leaves. A good example of the trend is Wonderland arcade in Kansas City, where soldiers, sailors and marines make up 60% of the crowd. Main attraction of the arcade is that they go there to kill two or three hours for less than the price of a movie, and if they don’t like one divertissement, they can try another for a penny.
Entering Wonderland, the visitor encounters a confusion of sounds – juke boxes, shots from the rifle range, bells ringing on myriad machines. The whole atmosphere is on of carnival. Soldiers are inevitably drawn to the shooting galleries, where they try their skill endlessly until their girls drag them away to the fortune to the fortune-telling machines which have romantic implications.
Also popular are the penny peep shows which employ provocative facades (“Have a look in the Sultan’s Harem”) and turn out to be mild tableaux featuring wax figurines and a corny sort of humor. Wonderland stays fastidiously away from striptease sequences and girlie postcards found in other arcades. It continues on its highly successful way, however, by offering a wide range of attractions from punching bags to Kiss-O-Meter. Several of the machines are arcade antiques of early Coney Island Vintage. None is new for there will be no more penny-arcade novelties manufactured until the war is over.