Well, I am actually not so sure about it being Russian, but it’s definitely a gourmet recipe shared by my Mom. What prompted me to make it was a visit to a local soup place where I paid four dollars for a ladle of mushroom soup. For some reason that price really bothered me; I’ve always thought that the soup was a poor man’s meal, often seen dispensed to the hungry people waiting in line in the Depression movies. Unless the soup is made of some exotic ingredient, I don’t see why it should be pricey, and mushroom soup is no exception. So the same night I called my Mom and wrote down the recipe.

Back in the Old Country© mushrooms were sold at the farmers market by the individuals who looked like they’ve spent their days in the woods, rarely coming out to sell their bounty. 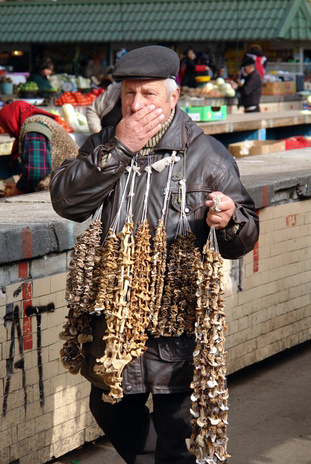 The transaction involved a certain amount of faith in the seller’s mushroom-picking skills, his abilities to identify and not pick the poisonous kinds and to prevent worms and bugs from getting into the final product. Since these mushrooms were wild, there was always a chance of something dangerous showing up on the strings of mushrooms hanging around the vendor’s neck, but the fact that they were seen on the market with some frequency made it somewhat reassuring that previous customers were still in good health. Dry mushrooms had to be soaked, washed and inspected for worms and insects, so it’s not surprising that my Mom updated the recipe to use the fresh mushrooms found in any grocery store year-round.

For this recipe you will need some mushrooms, I used two 8 oz packages of whole white mushrooms; one cannot over-mushroom the mushroom soup. Also needed are some potatoes, one medium onion, 2 tablespoons of barley, 2 Telma mushroom soup cubes which may be often found in the kosher aisle of your grocery store. The mushroom soup cubes contain MSG, so if this is a concern for you, skip it; I personally don’t think it causes any harm and most of you would be surprised that you consume it anyway, hidden under different names on your ingredient lists.

Barley, which for some reason is not very popular here, is also sold at the grocery store, although it may be hard to find. In my local store it was on the floor level, next to the soup mixes and not with the cereals where I was looking for it.

Ingredients assembled, move on to the easy part – making the soup. Peel and cut the potatoes into medium-sized pieces. Place into a pot (I used 2 quart) not completely filled with water, add barley, bring to boil and then continue to cook on the reduced heat. In the meantime, slice the onions into rings and then half or quarter the rings. Add to a skillet with a little oil or butter and cook on the medium or medium-low heat. Peel and roughly chop the mushrooms. My Mom suggested not to skip the peeling and for that reason I didn’t buy pre-sliced mushrooms. Peeling mushrooms is actually easy and not as tedious as I expected it to be. Add the chopped mushrooms to the skillet. Mushrooms will release water, which will eventually evaporate. After most of the liquid evaporates, add the contents of the skillet to the pot, together with crumbled Telma cubes. Cook for a bit longer, like 15-20 minutes, add salt to taste. Serve with sour cream. 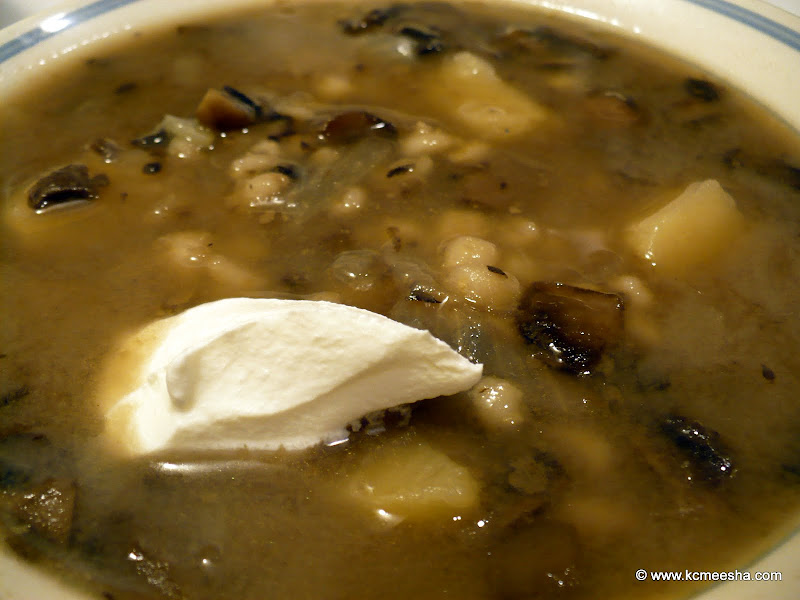 I understand that this may not be everybody’s cup of soup, but it’s one of my favorites and for about $5 for 2 quarts of delicious soup it’s a lot more fun to eat.

Just like my ever-popular recipes for the red and green borschts, this soup is easy and inexpensive to make and is probably good for you too. Enjoy!

For more cheap and nutritious (albeit non-Russian) recipes, check out Donna’s new blog.