When people like me talk about our dislike of the concept of the income redistribution many arguments are given on why it’s good for everyone: social justice, fairness, breaking the class barrier, etc. In addition, one of the  intellectuals, world travelers and other lawyers who often comment on Emaw’s blog recently noted “Guess what people, America’s not in Kansas anymore–we’ve decided to re-join the world!” First of all, I don’t like people who speak in slogans, and, secondly, the concept of Americans being somehow behind the world always bothered me. Just like the rest of the world, Americans have many things to be proud of and some things that are not so great, but European by no means automatically means superior.

Given the above, when I see an article that points out the fallacy of income redistribution and it’s happening in Europe I just have to bring it up to your attention. This article supports my point that good intentions combined with other people’s money equals failure, and even enlightened and compassionate Europeans cannot keep themselves from crossing the fine line between the safety net and free money giveaway.

A mother-of-five claiming benefits is living in a detached home worth £1million – with taxpayers helping fund her £25,000 annual rent. The luxury five-bedroom home with two sitting rooms, a conservatory and a double garage is being paid for with housing benefits handed out by her local council. Situated in a smart north London street, the £1million home is out of the price range of most families in the UK. The average house price in Britain is £224,064. Nigerian single mother Omowunmi Odia moved her family into the home two weeks ago and last night said she was pleased to be living there – although she criticized the large house for having a small bedrooms.The family had been living in a cramped flat before the move. ‘I was living in a two-bedroom apartment with my five children and only moved in here two weeks ago,’ said Mrs Odia, who is in her thirties.’They didn’t have any council houses big enough for me so I found this one. I like it; the children like it,’ she added.Mrs Odia has been living in the UK for 10 years and is entitled to the home under government rules. It has recently been revealed that taxpayers have paid out £14.8billion for housing benefits in Britain in 2006-7. Mrs Odia, who drives a six-year-old family car, had been threatened with homelessness when she was forced out of her flat when a court order was obtained against her. She was rehoused by Barnet council in the spacious property in Edgware, bought by its owners in 2005 for £650,000 but valued at £1million at the height of the property boom. Mrs Odia said the council had tried to rehouse her in Enfield, north London, but she had held out for Edgware, close to her children’s schools. One of the bedrooms, she said, was ‘no bigger than a shoebox’. She lives off state handouts and has not been in contact with her husband, who remains in Nigeria, for at least three years.The property is unfurnished and most of the rooms are empty bar a leather sofa and armchairs in one of the sitting rooms. More than £4 billion of taxpayers’ money is being spent on housing benefit across London – an increase of more than 40 per cent in five years. ‘Too little is being done to reduce the bill by helping people become self-reliant,’ said Matthew Elliott, chief executive of the TaxPayers’ Alliance. ‘The principle of housing benefit should be that it is a safety net designed to help you get back on your feet, not an automatic life-long provision, no questions asked.’ Last month an Afghan immigrant and her family of seven were given a £1.2million home to live in. The seven-bedroom house in Ealing, west London cost the taxpayer £150,000 a year.
Barnet Council said it had not been involved in finding the property for Mrs Odia and said that she is paid ‘considerably less’ in housing benefit than the £25,000, but could not provide a figure.

To recap: a woman who “lives off state handouts” moves into a £1 million house paid by British taxpayers. According to the article it’s not a clerical mistake, not an outstanding occurrence (I am sure not every British unemployed gets a house like this, but there are at least two cases documented just in this article). Is it a truimph of the social justice as seen by many American voters, or just good intentions gone awry?

We are already not immune to similar binges that public officials have with taxpayers’ money. There is no reason to believe that these people can control or police themselves in their drive to help the disadvantaged. To me this is just as immoral as greed which created mortgage crisis and “internet bubble”, or speculation that drove oil prices up. So when you hear me bitch and moan about income redistribution, just take a look at the picture of the house above. That’s what I am talking about.

In conclusion, I will try to explain this Soviet caricature published in 1952. As you may know, the communist credo is “From each according to his ability, to each according to his need“. The title on the caricature is “Extraordinary abilities when it comes to needs” and  the guy sitting on the giant empty trunk is saying “Let someone else work, as for myself, I am ready for communism to arrive” 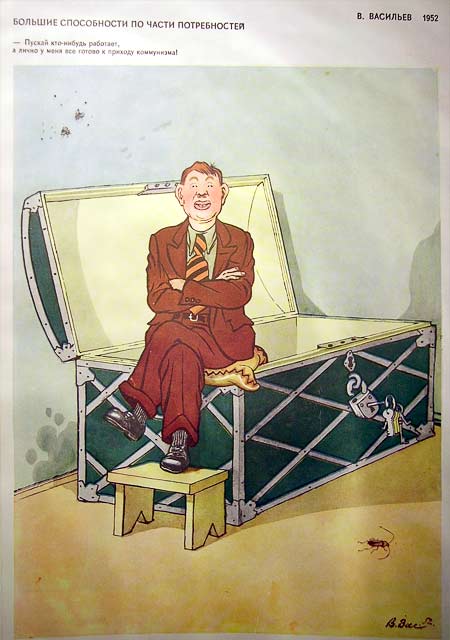