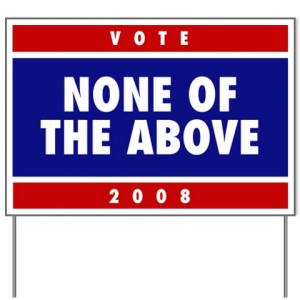 Although I enjoy reading and talking about politics, I never bothered to watch either a Democratic or Republican convention. In my younger years I had to watch, read and pretend to care about 5-hour long speeches given by L.I.Brezhnev at a Congress of the Communist Party of the Soviet Union. After the speech (or before) the speech was published as a neat little booklet for adoration, study and general guidance for the people. One might say that I fulfilled my lifetime quota on speeches early. Today, however, I sat down to watch some of the Democratic National Convention because it’s “historic” and I had nothing better to do. I have to say it was a pitiful show. Drama was piled on thick, the parade of the aggrieved leading to the Obama’s speech was especially nauseating. I got bored with the speech shortly after it started and stopped paying attention when Obama proceeded to generously hand out bullshit promises to the crowd in the stadium and to the rest of the American people.

Few days ago I read an article The Rise of Fantasy Politics by Robert Samuelson. I like when the author is at least trying to maintain the perception of being fair. My views on the subject are very similar to Mr.Samuelson’s, but he is a much better writer:

As we watch the conventions, we should recognize that we’ve entered an era of fantasy politics. Like fantasy football and baseball, fantasy politics is an exercise in make-believe that is intended to keep its players occupied and to make the winners feel good. Barack Obama and John McCain emit pleasing slogans and programs that, as often as not, are disconnected from the problems they’d encounter in office.

Mr.Samuelson goes on to use analysis of both candidates’ proposals to show that they are not based in reality and will never become policy:

Many campaign proposals are so unrealistic or undesirable that they may never be enacted. McCain would cut taxes again for the rich. Is that needed or likely? No. Obama would create more special tax breaks for homeowners, college students, workers, retirees and others — further clutter in an already complex tax system.

Sad conclusion coincides with my conviction that the there is not much difference between the candidates outside of appearances and the voter might as well flip a coin and brace for the worst.

Proposals aren’t necessarily intended to be adopted. They’re selected to win applause and please voters — just as quarterbacks, in fantasy football, are selected for their accuracy. In November, one candidate will win this game. But the country as a whole may lose.

All the symbolism, tears, sad stories and balloons are designed to distract the voter from the fact that there is no point in voting, just like a car dealership in the ghetto uses Christmas decorations all year long to dupe some poor schmuck into buying an old clunker.

Next week – the same bullshit- different day but with much older and not-as-good-looking candidate. I wonder if McCain’s biography video is twice as long as Obama’s.