Sitting around last Sunday afternoon we were bored and decided to go the movies to see Step Brothers – the latest display of retarded comedy (sorry, retarded people) by Will Farrell, who sucks, always sucked and will always suck. But my daughter liked his previous movies, I had a free ticket so I thought it was worth exactly 5 bucks for two people to see this show. I am very liberal with what my daughter is allowed to watch. There are only two conditions: 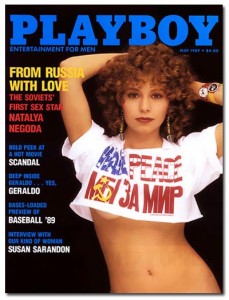 When I was growing up© we had only three TV channels with carefully censored programming. All the movies foreign and domestic were lovingly cleansed of anything resembling sex or nudity and there was no cussing. Soviet movies weren’t a problem, these were censored at every stage starting with the script, so there wasn’t any of that stuff by default. Foreign movies were harder to deal with but hey,we were flying a space station, we were certainly able to convert a sex scene into a heated discussion of works of Karl Marx (I am kidding, do not quote me on that). The first Soviet movie with a sex scene in 1988 became the most popular movie of that year and it’s star made it to the cover of the Playboy in 1989. Despite total visual nudity deprivation (we didn’t even have lingerie ads) and not hearing forbidden bad words on TV and movies, I don’t know of anyone who can’t cuss or didn’t know how to have sex (we didn’t have the sex ed either). Obviously, isolating kids from bad things is not effective, on the contrary, it makes them more exciting, so I don’t make a big deal out of it.

This whole story was to explain that I didn’t look at the ratings when we went to see Step Brothers. The movie started out with some heavy f-bombs, nothing to make me blush but I thought that it was a little too much for an 11-year-old. I asked her if she wanted to leave. She didn’t. Next came a no-nudity sex scene, my daughter followed the rule #2 but decided to stay on. Few minutes later Will Farrell pulled out his hairy nut-sack and started rubbing it on a drum-set. I don’t know about my daughter but I didn’t care to see another guy’s nut-sack, so we quietly walked out and proceeded to see Mamma Mia which was more age appropiate at least when it came to nut-sacks. For all I know we could have been in Emaw’s presence when he was pretending to like this movie to later blackmail his wife into doing him favors.

I always thought that’s how normal Americans would deal with the situation, if they don’t like something they would leave, ask for a refund, change the channel, spit it out, etc. As I mentioned earlier I was surprised that many Americans can’t just walk away and ignore something they don’t like. They would spend time, money and effort trying to censor the source of the offense by boycotting, picketing, calling for public executions, demanding apologies and otherwise trying to extort money from someone who just exercised their right to speak freely. Don’t for a second think that all the outrage is not a form of simple money extortion. Somewhere, somehow a donation will be made to Special Olympics or some free publicity, or maybe a commercial with and offender in it hugging a retard, no matter what it is, money will exchange hands and the scandal will die down. Here is the key phrase from one of the articles:

In other words, “The Ringer” was smart enough to hire (read: pay off) this guy as a consultant on the subject of the retarded and it’s suddenly an educational piece. “Tropic Thunder” was too cheap and now will pay many times over.

The outraged activists are trying to classify the words “retard”, “moron” and “idiot” as hate speech. If this passes, my English vocabulary will be cut by about 75%. That’s why I will be supporting this movie by attending it when it comes out. I won’t go as far as buying a DVD (I am cheap), but I will rent it for sure. After all, while others are too busy being offended, someone has to act American….