It rained communism and income redistribution.

In dim light reluctantly released by the Government so the citizens wouldn’t bump into each other I was schlepping to kindergarten. It was 5 in the morning. I turned 5 just few months before and my sleeping in days were long gone. The System wouldn’t let me stay in bed past 7 for the next sixty years, when it will spit out my chewed up and worn out shell of a body patched up like Frankenstein monster by the torture they called free medicine.

I looked around. Zombie-like builders of communism were slowly moving past me. Same clothes, same faces, empty eyes. Years of being fed just bread and fat-free ideology drained the will to live out of people. At night, when the curtains were closed and my parents covered up the listening devices, they whispered about something they called meat.  Once a year they tried to recreate meat out of contraband mayo and turnips. It was horrible but we stunned our taste buds with vodka to make it palatable.

It was early spring but one couldn’t tell just by looking at the Communist-controlled weather. Behind the barbwire fences, system’s functionaries, the apparatchiks,  were frolicking in the sun and warmth. We got what was left.  Used air contained hardly any oxygen. I stopped to take a deep breath.

The International Women’s Day – a holiday celebrating heavy women in cotton-stuffed waist jackets, head scarves and year-round galoshes was approaching. Communist cell in the kindergarten was preparing a concert where like trained monkeys we would attempt to entertain these never-smiling representatives of the weaker gender. Weaker? I evil-laughed on the inside, grinding my teeth. My face remained stoic and expressionless.

I was assigned to perform a Russian folk dance. The System knew I was Jewish and it was their way of putting and extra-painful twist on the torture that was dancing. My head yearned to be covered. My feet were itching to break out in Freilach. I craved gefilte fish even though I didn’t know what gefilte was. Or fish. Instead I found myself standing next to a girl, dressed in a Russian shirt and shorts. It was so cold inside that even ever-present Lenin’s portrait on the wall was covered with frost. My legs were slowly turning blue to match the shorts. 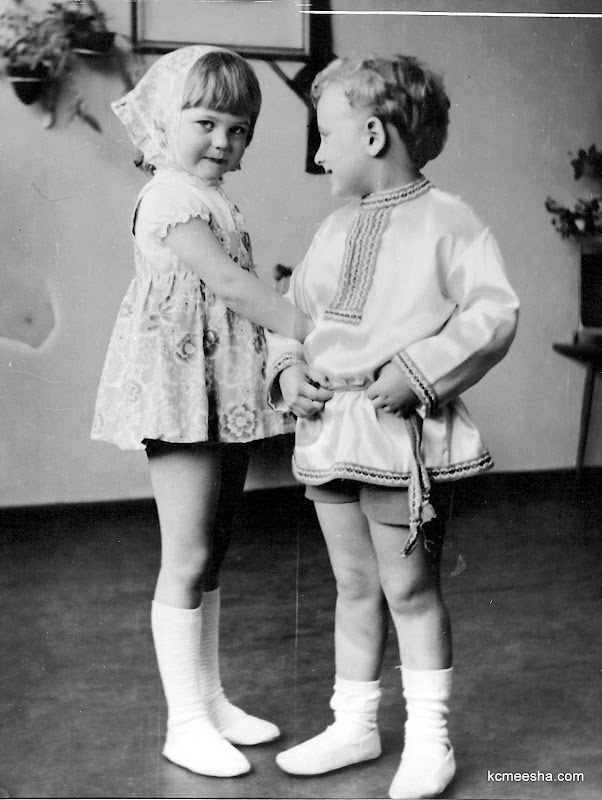 When the music started the headmistress’s eyes told me I had to smile and dance or I will be forced to read Das Kapital while marching around the room for the fifth time in a month. My smile felt like a grimace and my dance moves were awkward, but I couldn’t bring myself to read about the plight of the proletariat one more time.

Scary women in the audience did not smile anyway. They just didn’t know how. After the performance the teachers force-fed us disgusting chocolates filled with Marxism and Leninism. I willed myself not to gag. This came useful later when I lived on the streets of New York doing anything for a buck. Just like Marx predicted.

Standing there ashamed and smeared with chocolate, in a room where one could cut ideology with a knife, I had a dream that I, I someday will tearfully tell about my hardships to the American press and be quoted in every article about Russia.