When my Mom asked me what I am doing on Saturday night and I replied that I was baking pumpkin rolls, she thought it was a sad way to spend a night off. In reality, baking with real pumpkin is lot like having sex: there is a lot of foreplay and then there is an intense but short-lived moment of pleasure, followed by desire to do it again and a feeling of being too worn out to start over. As a matter of fact, I feel completely beat and sleepy after wrestling with this for nearly 3 hours, my kitchen is a mess and if I had a cigarette I would’ve lit it up just about now.

I think the second most vicious food crime against the American people after the invention of the sliced bread was the proliferation of canned pumpkin. Nearly every American family buys one or more pumpkins every year, pokes some holes in them and leaves them out to rot on the front porch, just to turn around and go to the grocery store to procure baby-stool-like substance, both in color and consistency, to use in various disgusting recipes. The sad thing is that this stuff really doesn’t taste like pumpkin but since no one knows what the real pumpkin tastes like, everyone identifies it as a pumpkin taste. Well, it’s not. Pumpkin is normally bright orange and sweet-tasting, not medium brown and spiced. Some information on edible pumpkins can be found here and here.

Some notes on the pumpkin handling: it’s not easy. You have to have a decent knife and be careful not to hurt yourself. Don’t  pour  blood all over your keyboard typing me an angry letter, because I warned you. After trying to separate the flesh from the skin cantaloupe-style I had much better luck turning it over and just peeling the skin off. I also found out that shredding the pumpkin with a grater is a long and tedious process much better handled by a food processor. Other than that you don’t have any excuse to trade a sweet pumpkin orgasm for a can of brown crap.

For this recipe you’ll need:

Melt the margarine and combine with egg yolks, sour cream, vanilla, sugar and oil. Over the flour place 1/2 teaspoon of baking soda in a larger spoon and pour a small amount of vinegar so it reacts. Make sure that all of the soda is gone in the reaction and combine the flour with liquid mixture. Add salt. Start lightly kneading the dough adding flour as needed until the oily sheen is gone and the dough springs back if you push it with the finger. Cut into six parts. Roll out each part into elliptical shape, add sweetened pumpkin and roll over several times. When adding pumpkin, squeeze it lightly to leave most of the juice out. Bake at 350F for 30-50 minutes until golden brown.

*Note: this is what I wrote down when my Mom gave me the recipe. Since it didn’t come out the way I expected, I took a roll to her for troubleshooting. Apparently I was kneading too hard and didn’t add enough flour. As you can see, my dough was still shiny but I was afraid I used too much flour and lost patience. My Mom confirmed that the recipe was correct and in my defense it tastes great, just slightly heavier than I expected since it didn’t roll out thin enough. Try at your own risk. I am pretty sure that my Mom doesn’t own measuring spoons or cups, so I was using regular drinking cups and table spoons for this recipe.
The important thing is that the great pumpkin taste I remembered from my childhood was there and that’s what I wanted to achieve in the first place. 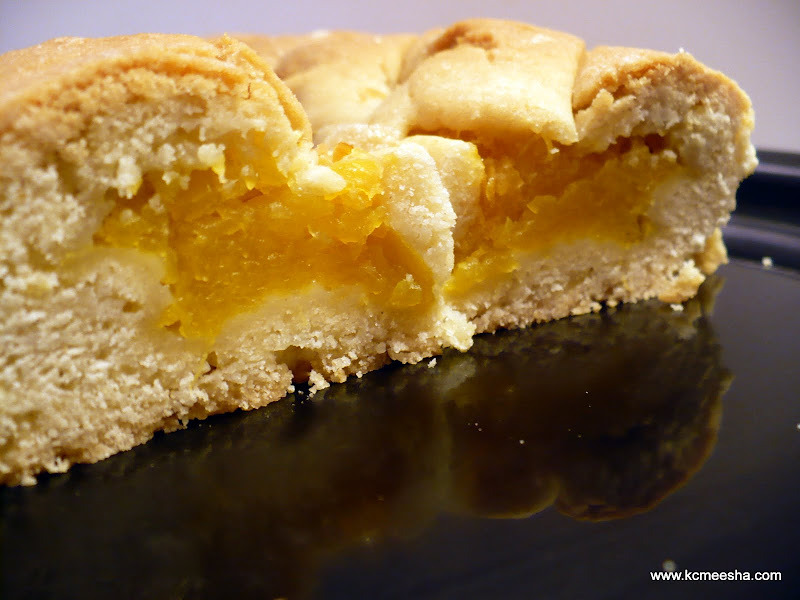 If you are feeling lonely on a Saturday night, get yourself a pumpkin, it will wear you out but you will feel good about it in the morning.