What I Did This Weekend

May, you may want to skip this one.

Sunday’s weather cooperated and, as I as was anticipating, we were on the way to Lawrence to attend Kansas State Fiddling and Picking Championships. Last year we attended this festival just looking for something to do (for free) and we liked it so much that this year we were actually planning on going. There was a pretty good-sized crowd, unlike the other notable music event, proving again that location matters. The festival had two stages where competitors and performers such as O’Shea Sisters and DeLancey Trio took turns entertaining the public. We spent around 3 hours listening to the music, wandering around and taking some photos and videos. Most of these have heads and other parts of people who decided to park their fat obnoxious asses in front of me, so I forever have memories of these inconsiderate morons. Click on the cover to see the rest of the photos. 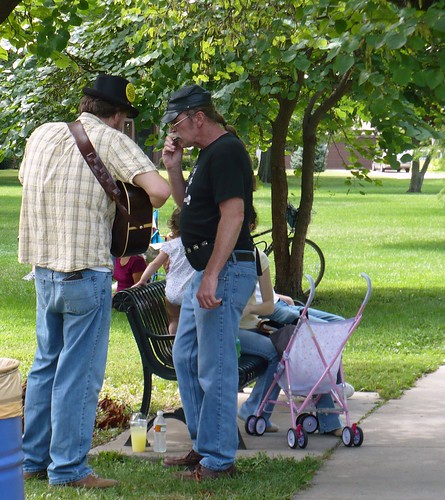 Another unexpected and pleasant surprise was waiting for us in downtown Lawrence where The Lawrence Busker Festival was taking place. My daughter and I are big fans of buskers, although until yesterday I didn’t know that they were referring to themselves as “buskers”. I always thought it was “street performers” or whatever. There were quite a few of them – magicians, jugglers, musicians – and downtown Lawrence was alive with crowds. We didn’t leave Lawrence until after 5, after eating at Rudy’s Pizza and finishing with Ben and Jerry’s Ice cream.
And that, May, is what I did this weekend.