Behind the Iron Curtain: Military Draft 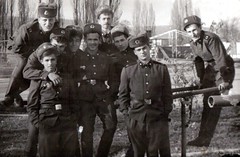 When I was growing up© every able-bodied male over 18 years old was drafted to serve 2 years in the Army or 3 years in the Navy. Very few people were able to escape the draft based on health and other reasons. Going to college resulted in getting the lowest officer rank but even then a person had to serve some time and if you quit or got kicked out of school, guys in uniform came looking for you without delay. Threat of the military service was probably the single largest stimulus for getting into and staying in college for any male.

Exactly 20 years ago, on July 8th, 1988 I had to report for duty at the local draft station. Several hundred young men gathered in the yard waiting for their fate to be decided by chance and lucky or unlucky circumstances. We all wore old clothes and had backpacks with personal items, we all tried to act brave pretending that this was just another day in our so far mostly care-free lives. In reality, for many of us it was the first day of our adult lives. Most of us have never been separated from our parents for more than a few weeks, many of us never traveled far away from home, we stood there looking like we could care less but our future couldn’t have been any more uncertain.

In the middle of the yard on a desk there were stacks of personal files. Once in a while an officer walked in (they called them “buyers”) with a requisition for a certain number of people and grabbed a handful of files from the top of the stack. That simple act decided where the draftee would spend the next few years: the most unlucky ones were stuck for 3 years in the Navy where being short almost guaranteed a submarine; the others got the Army and shorter guys didn’t fare much better – they were a perfect fit for a tank. In 1988 they were still sending people to Afghanistan, so your file being on top in the wrong time could ultimately decide if you would come home in a zinc coffin. And then there were locations – anywhere from remote posts inside the Arctic Circle, to scorching desert sands; mountains, faraway borders, big cities, resort towns, or somewhere deep in the woods where you’d see people once in 6 months – military was everywhere and all these places needed new “meat”.

My parents didn’t try our “Jewish luck” – a friendly (bribed) officer kept taking my file off the top of the stack until a good buyer showed up. I ended up only a few hundred miles away in the engineering regiment. My parents were happy – I was not too far, I never found out how much money and favors did it cost my Dad. I was happy – I didn’t end up in some horrible dump. “Friendly” officer was happy – he had a reason to celebrate. And the Soviet Army got one of the most worthless soldiers in its history.

That hot day in July of ’88 is still with me. Anxiety and fear long ago faded away but I still remember the buyer grabbing my file from the stack, like a hand of fate grabbing my life and pulling it into a mysterious unknown future.

I wrote a little about my first day here.