The fact that you are reading this blog in English is a testimony that an average person can actually learn the language enough to express himself. My English may not be perfect but it’s pretty damn good, if I may say so myself, at least until you meet me in person. As a matter of fact most of my relatives aged 0 to 92 speak English with various degrees of proficiency. Both of my Great-Aunts passed the test for US Citizenship where they had to answer simple questions in English when they were over eighty, my Mom who didn’t know a word of English until she was 50 can carry a decent conversation, other relatives while not Obama-like orators will not shy away from a book, a movie or a conversation in English. Many businesses and government agencies will accommodate someone who doesn’t speak English, you can get an interpreter live or over the phone in most of life situations. The greatest stimulus to learn a language is the need to make yourself understood and be able to understand others. When this stimulus is taken away the person will probably never learn. Multiple examples of ethnic communities show that if people can handle their everyday needs in their own language they will not be motivated to learn English in this country. That’s why it pisses me off when certain well-meaning degenerates are “helping” Mexican immigrants by translating everything to Spanish.

My daughter’s school is already conducting all of it’s communications in two languages. Every letter, note, sign and poster is thoroughly translated into Spanish, so the parents don’t need to concern themselves with such a useless skill as learning English. While this may be helpful and convenient in the short run, these people will never learn to speak English and, therefore, will never be able to move on to any job that requires even light conversational skills. One of the most efficient methods of learning a second language is by immersion but the school administration is denying the immigrants an opportunity to immerse themselves in the English-speaking culture. There is always a Spanish-speaking counselor or teacher on-hand and there is never any need to say or read a word of English.
For some reason our society decided that Mexicans as a group are incapable of learning English. Other Spanish-speakers are usually successful in learning the language. So are the other groups who never expect to be communicated with in their native language. In the areas with high concentrations of certain ethnic groups you may see a sign or a note in some foreign language but nothing on the scale of what’s being done to Mexicans who are being completely shut out of the English language. Of course, these efforts cost money. Teacher’s unions and government employees are happy to soak it up. The costs of hiring bilingual customer service reps are spread out to all the customers, costs of maintaining bilingual schools and offices are shouldered by taxpayers.
As the result of these efforts we became a de facto bilingual country. I think the move to having two languages in this country will have many unintended and unpredictable consequences. None of them good.In the meantime Krispy Kreme Donuts shows no concern for Hispanics. Unless you can read English or are a French Canadian you won’t be able to read the warning on their cup. Nothing teaches you to use a certain English four-letter-word like a splash of a hot coffee in your crotch. Enjoy (Goce)! 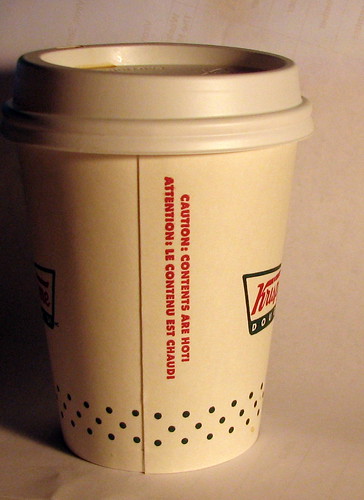