Not a day passes when I am not asked about the situation in Ukraine. I have few friends in Ukraine and Russia and I keep a close eye on the developments. The events on the ground are played out thousand-fold in press and social media on a previously unprecedented scale. Newly-minted Russian and Ukrainian truthers on both sides sift through photos, text and videos, each coming away with the “iron-clad” proof of their version of every event. Facebook and Twitter wars reached a level warranting creation of a new term to describe it. Press resurrected the vocabulary and the level of vitriol not used since the 1970’s. For people of my and earlier generations the parallels with the past are obvious, what’s not obvious is how so many people can’t see them.

Luckily most of my friends remain sane and their integrity and sense of humor are intact. Others… As a woman I dated said to me once “I didn’t even know the real you”. It’s not that I don’t tolerate opposing views, it’s the hysterical tone of discussion that I find disagreeable. And just like that, explosions in the country I left so long ago are felt in such far away places as Kansas City.

This was a short introduction to an article by the Russian writer Alexander Prokhanov, an open anti-Semite and extremist. Or should I say former extremist since this article published yesterday no longer represents the extreme in what’s being put out on TV and Internet every day. More and more this is becoming mainstream and the voices of my friends are drowning in the ocean of screaming idiots.

My translation skills are not good enough to convey the dramatically-sermonizing tone of the piece, but until someone does a better job, this should cover it. Links and emphases mine.

For four years Soviet battalions and regiments, fearless divisions and enraged armies, mighty and unyielding fronts marched to it over blood, fires, and battlefields littered with bones. Tank crews, burning to death in the T-34’s, continued to shoot at the “Panthers” and “Tigers”. Pilots engulfed in flames rammed the German convoys and trains. Artillery tore at the Wehrmacht. Partisans, tortured to death, spit in the face of the executioners.

Ten Stalin’s strikes, ten red spikes were hammered by my Motherland into the hirsute torso of fascism. In the basement of the Imperial Chancellery the warriors found a black egg, smashed its shell, and broke the needle* containing Hitler’s death. Fascism croaked, as dies a twelve- headed dragon whose heads are chopped off by a red sword one-by-one. In the year nineteen forty five light won over darkness, love over hatred, heaven over hell.

Before the land had time to settle on the graves of the thirty million fallen heroes, when the embers of burned villages and towns still smoldered, Stalin gave the order to plant gardens. And these heavenly gardens bloomed from sea to sea. Among these blooming gardens we have rebuilt our ruined cities. We’ve built divine Minsk, amazing Kiev, and radiant Sevastopol. From these gardens we took off into space. And it seemed to us that their bloom will be endless.

But silent worms gnawed at our gardens. Insidious rodents destroyed our apples and pears. Our hateful enemies killed the Soviet country. Taken away its territory, its army. Destroyed the great factories. Broke the will of the victorious people. They encroached on the Victory, which was sacred for us.

But the worms could not gnaw at the sacred. Rodent teeth broke on the holy likeness. We carried the victory through nightmarish nineties. And on this icon again blossomed a scarlet bud and bloomed a wonderful red flower.

We inhaled its aroma, drank its magic juices. Rose again from sickness and sorrow. Built our state. Erected factories . Strengthened the army. Returned the will to live to downtrodden. Inspired the unbelievers with faith. The victory remained with us, and we never lowered its red flag.

And as a gift for our patience and stoicism, for our efforts and faith the Lord has sent us to the Crimea. Russian people once separated by the enemies merged again in the arms of victory.

But the black sperm of fascism spilled on Kiev – mother of all the Russian cities. In the golden apse of St. Sophia of Kiev, among the shrines and temples, an embryo started growing with an ugly, hairy face and black horns, just like the devil is depicted on a church mural. Fascism, like rotten poison dough filled Kiev and began to spread through the whole Ukraine. Its tanks are rolling over the streets of Kramatorsk.

Its armored personnel carriers spread fire over Slavyansk. Its helicopters swoop over the suburbs of Donetsk. Its priests staged the ritual death in Odessa: forty Russian martyrs were burned alive while the executioners hooted and laughed. It was a fascist prayer to Hell, commemoration of Himmler, praise to Adolf Hitler. After Odessa crematorium Obama and Merkel smell of fried human flesh. Timoshenko, this vicious cripple weaved her braid with hair of prisoners of Auschwitz.

We celebrate the sacred victory of nineteen forty five, hearing cannons of enemy tanks in southeastern Ukraine, where there are mutilated bodies of militia, where there are crushed Russian skulls. New fight against fascism is inevitable.

Let President Putin review a military parade and give the order to marching regiments and combat vehicles directly from Red Square , St. Basil’s Cathedral to go to Donetsk, where a wounded militiaman with a weakening hand is throwing a Molotov cocktail into a fascist Bandera tank.

And here we see those militiamen and their weakening hands. 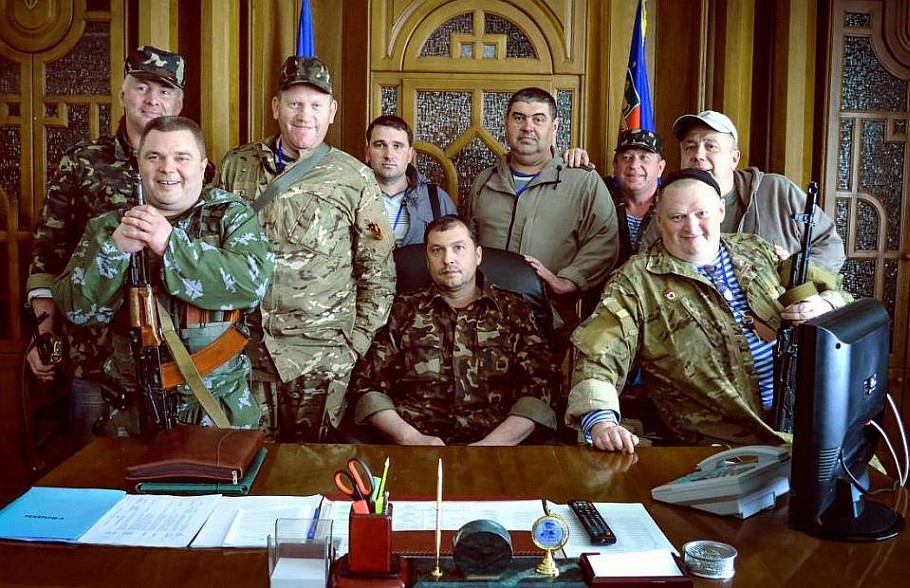