In the pantheon of stupid things passed around the internet this must be somewhere in the top one. 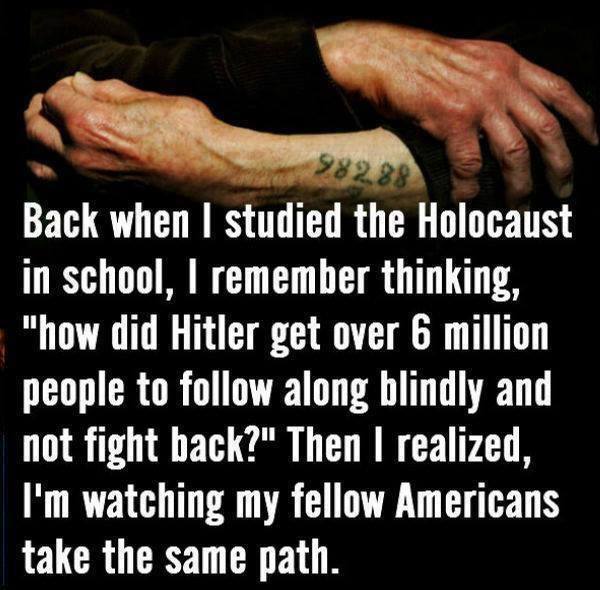 Yes, when you “studied” the Holocaust in school that was the thing you pondered. And now, when you finally completed your  GED you can clearly see the horrifying parallels with what’s going on today. You and your fellow Americans are obviously the Jews about to be sent to the gas chambers by the Hitler reincarnate running this country.

But you have learned your lessons and, unlike the Jews, you will not “follow along blindly and not fight back”.

You, who gets into a car to check the mailbox at the end of your driveway and whose idea of the wilderness is a 3-bedroom RV with a kitchen, a shower and a toilet will evade the government storm-troopers for months and even years.

You, who can’t squat to take a crap because your center of gravity is so far up your ass you fall over like a Butterball turkey, will survive in a cave somewhere where the dogs and drones can’t pick up your smell.

You, who rides a scooter in your local Walmart, will mastermind a guerrilla war that will become a legend and will be passed down on a scroll to your descendants, because the NSA is powerless against the scrolls.

But I can’t blame you, let he who hasn’t entertained the thought of Anne Frank blasting out of her hiding space with a machine gun in each hand and an RPG behind her back cast the first stone.

And I won’t even try to point out the the Jews and many other people the the Nazis felt like exterminating were a minority and that here you represent half the country. And that the Jews were easily identifiable and the ones that weren’t so obvious were in many cases turned in by their helpful neighbors and here you are just another schlub at the Arby’s drive-through.  And that there was a war and an army with guns and tanks and ruthless people ready to kill and that many Jews who faced them lived in places where all the able-bodied males were drafted leaving women, children and old people and to fend for themselves. And here none of this is true. And that there was actually a Jewish resistance but not enough to beat the Nazis, that took an effort of 3 industrialized nations and other allies.

And I don’t even want to start on your Obama=Hitler thing. We all know Hitler didn’t need a teleprompter. Am I right?

So just leave the Holocaust out of this. Obviously if you were alive then it wouldn’t have happened, but the history has no use for if’s.

But I am not a cruel man to take away your best grotesquely idiotic analogy. I am going to give you, absolutely free, some other story lines you can use:

Whatever you do, stick with something you know, like the Sunday funnies, the stuff you’ve learned from the Sports section and things Bill O’Reilly said on TV.

And leave the analogies to professionals.