If you are traveling from London to Amsterdam, there is no better way than an overnight trip on the Stena Line, not only it’s comfortable, inexpensive and pleasant, but it also saves money you would otherwise spend on the night at a hotel.

After spending few days in Amsterdam I realized that there is a crucial piece of information every visitor should know – all of the online reviews for things to do, eat and see in Amsterdam are written while high. OK, maybe not all of them but a large part; definitely every one that I’ve read while lazily preparing for the trip at home. So just like you automatically add “in bed” to the Chinese fortunes, feel free to add “when high” to anything you read about Amsterdam. With this little secret in mind everything falls in place, things like “the best apple pie in the world” (when high), or “the funniest comedy club” (when high) now start making sense. Since I traveled as a responsible parent who wasn’t high (second-hand high doesn’t count) many of those things seemed a lot less stellar as some clearly euphoric reviewers have suggested. Yet I didn’t find it discouraging, although you had to be really really high to enjoy the aforementioned comedy club.

Amsterdam is awesome. At the first sight of canals and bicycles a visitor grabs the camera and doesn’t let go until the last-minute in the city (and not because it might be stolen). 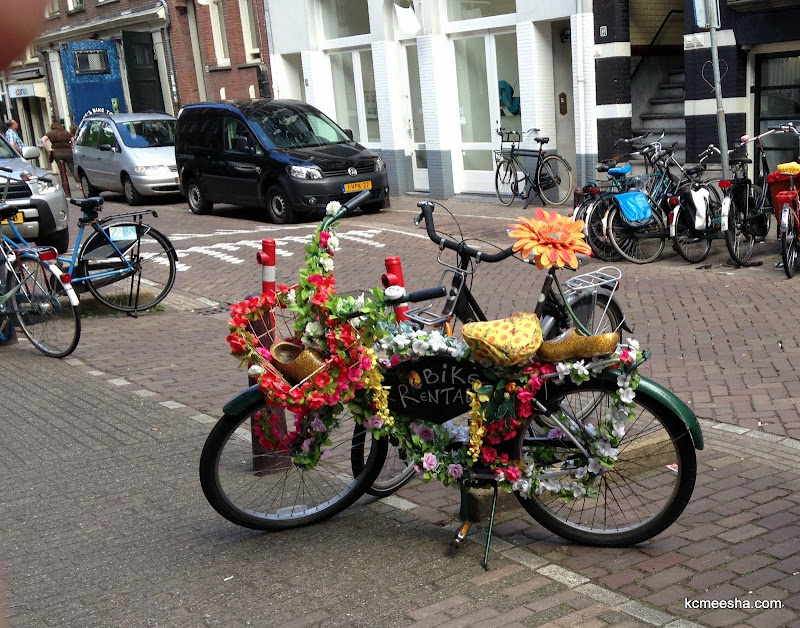 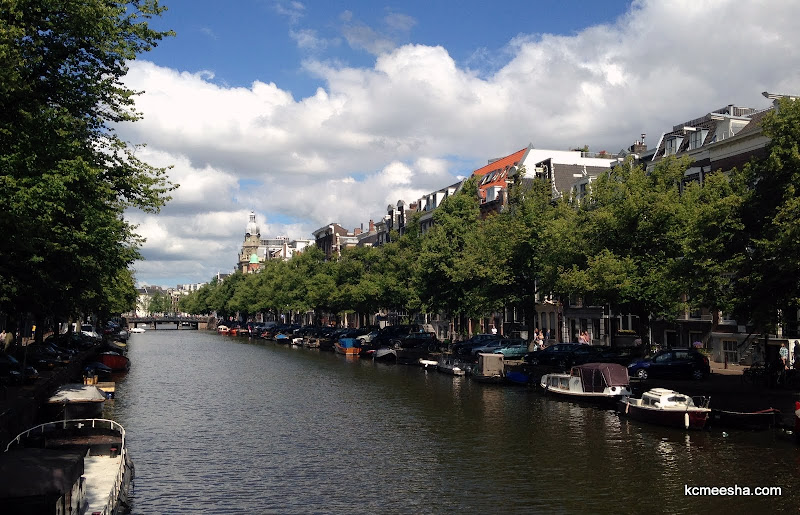 There is, of course, more to Amsterdam than canals and bicycles but it’s a matter of getting your fill of them; eventually you will be able to cross a bridge without taking a picture and get accustomed to the hectic bicycle traffic and the riders’ passive-aggressive ringing. 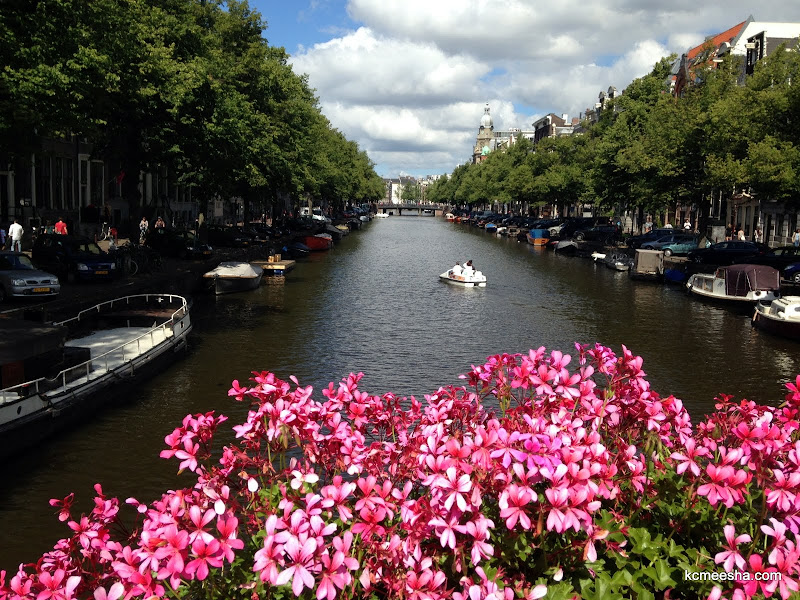 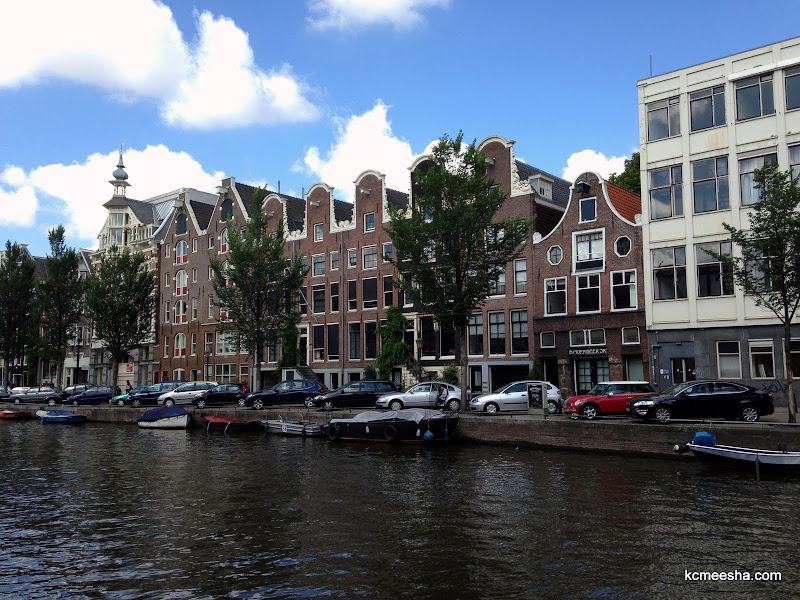 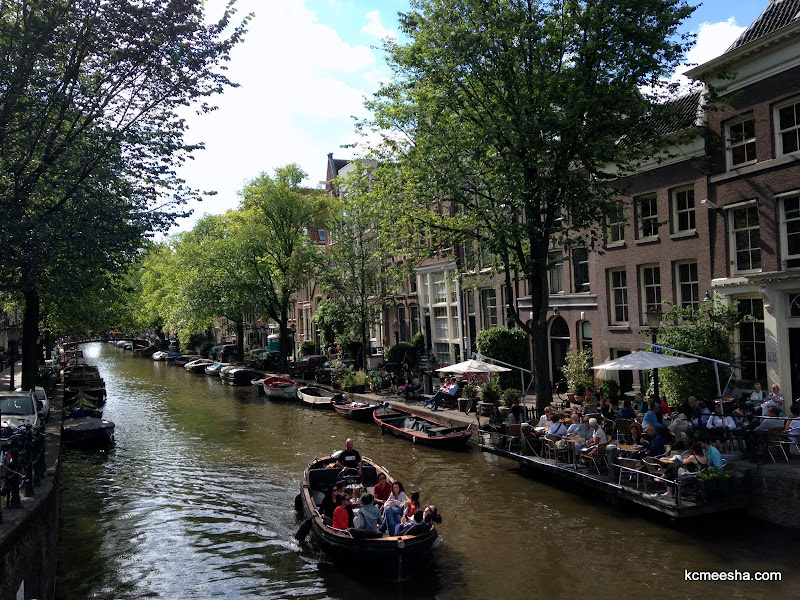 Eventually the bicycle thing gets old, especially in the city center; piles and stacks of bikes everywhere don’t add to the view, and locals seem to be angry dodging tourists both on rentals and on foot. It seems that the American national road rage hand signals didn’t receive a wide acceptance in Holland, but I overheard one of the bicyclists utter the only Dutch word I understood right away – füküp, while almost crashing into a tourist (don’t quote me on spelling).

Another thing unusual for an American eye is that no one is wearing bicycle helmets and spandex outfits making our cyclists look like they just got off the Tour De Something to pee and are getting right back to the front of the pack. Cyclists in Amsterdam look casual, some are more dressy than others, and just like drivers in this country some of them are talking on the phone, texting and smoking (not at the same time). Also of interest is a multitude of bike designs, every possible type of locking devices and a variety of contraptions for transporting everything from cargo to babies. 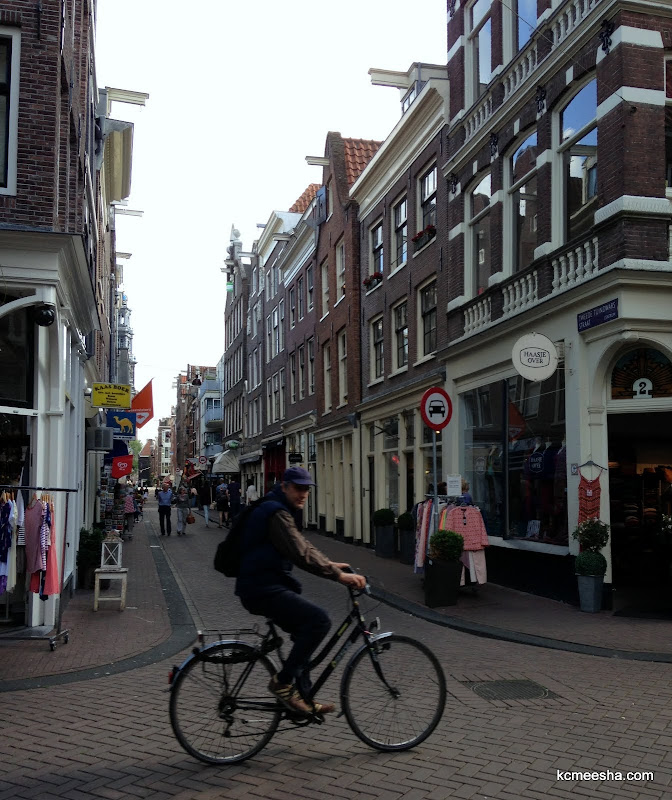 This is “the best apple pie in the world” (when high), we ate it at the restaurant famous for that reason. It was really good, but it wasn’t a pie. 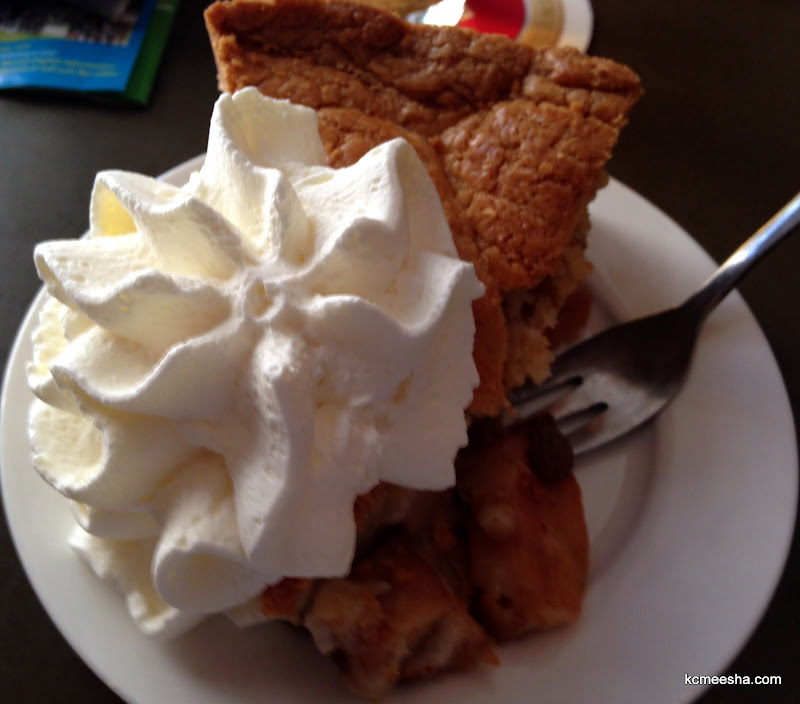 Many sights in Amsterdam are great even without the extra boost. 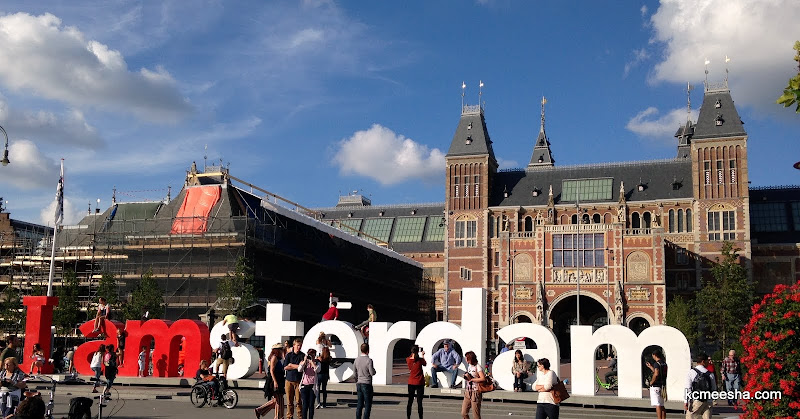 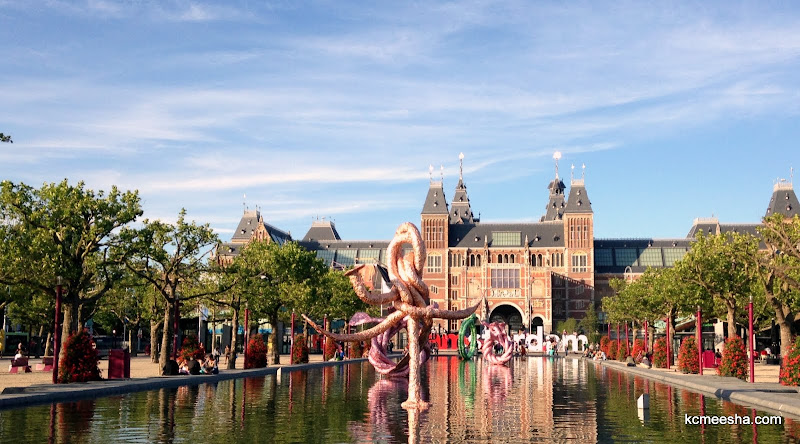 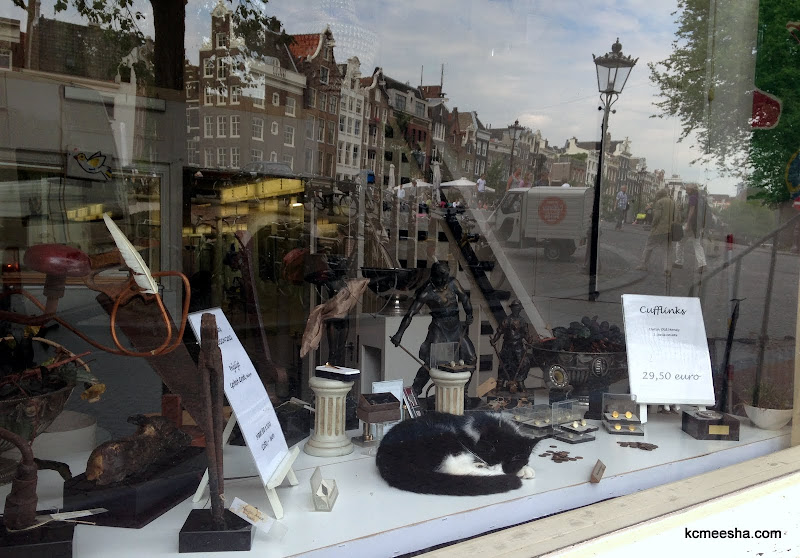 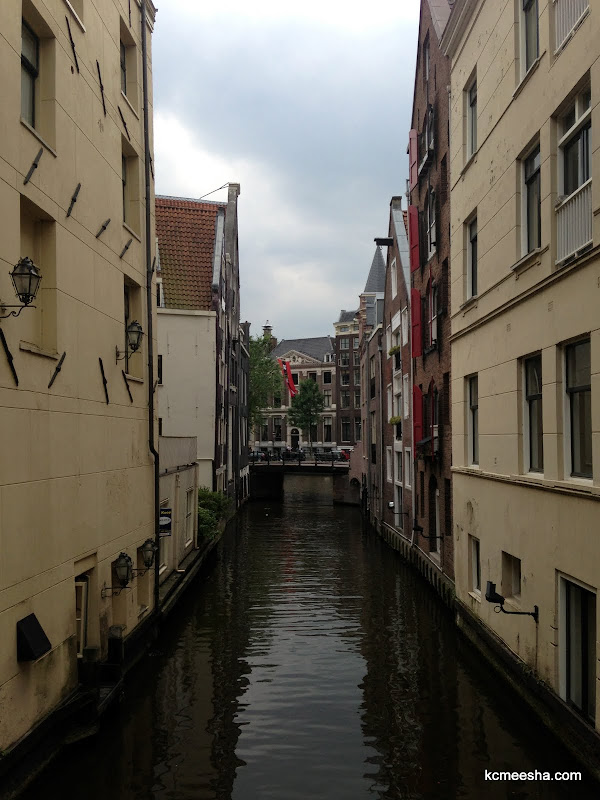 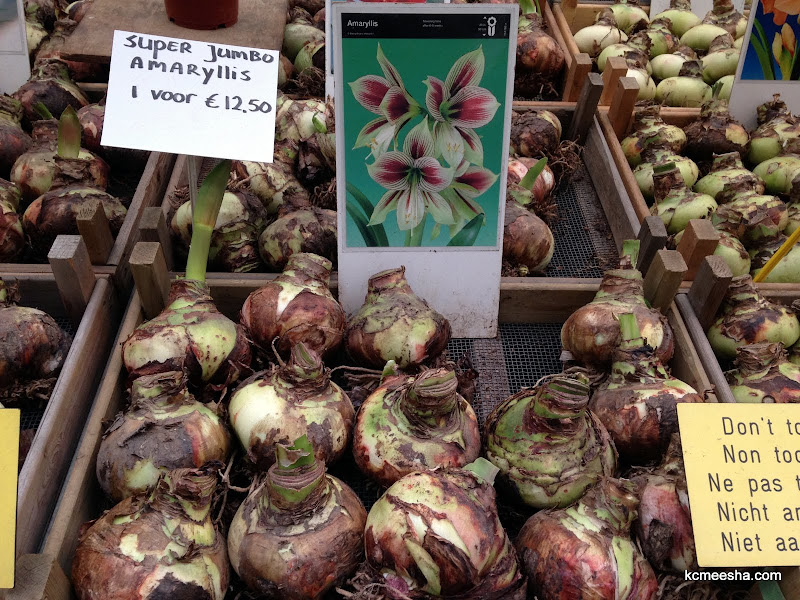 Something makes me think this is not just a coffee-shop. Can’t put my finger on it. 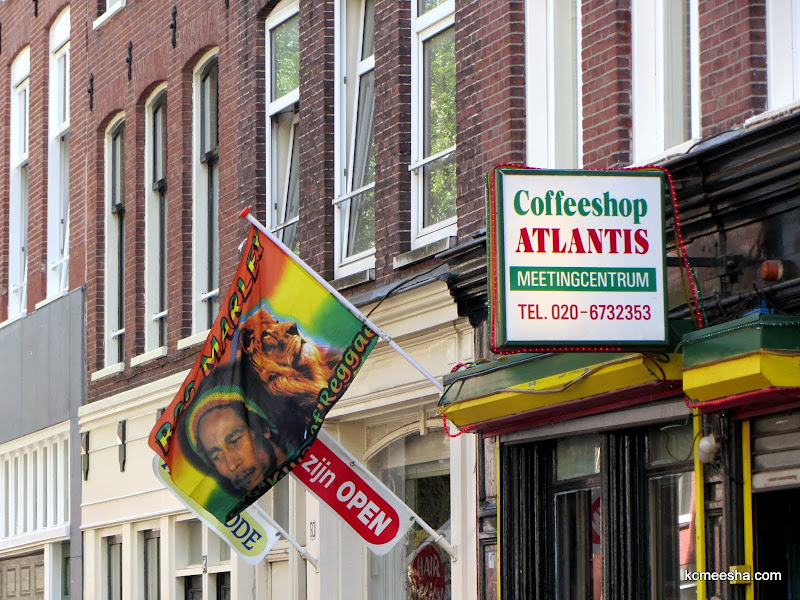 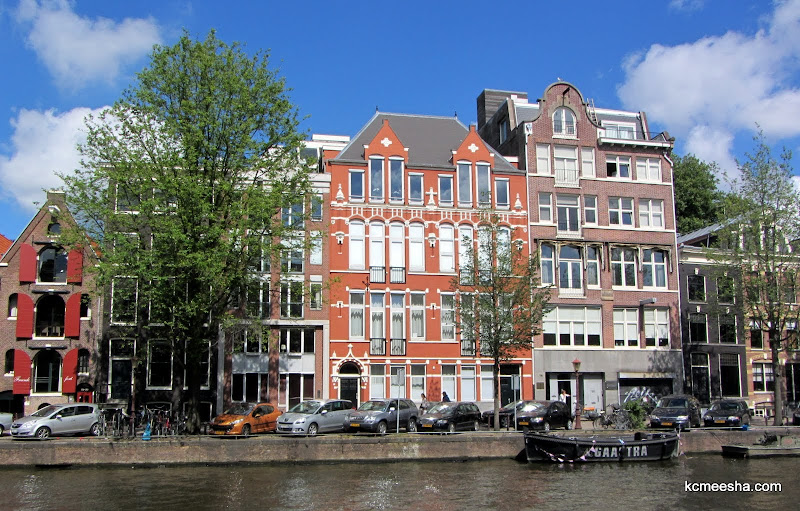 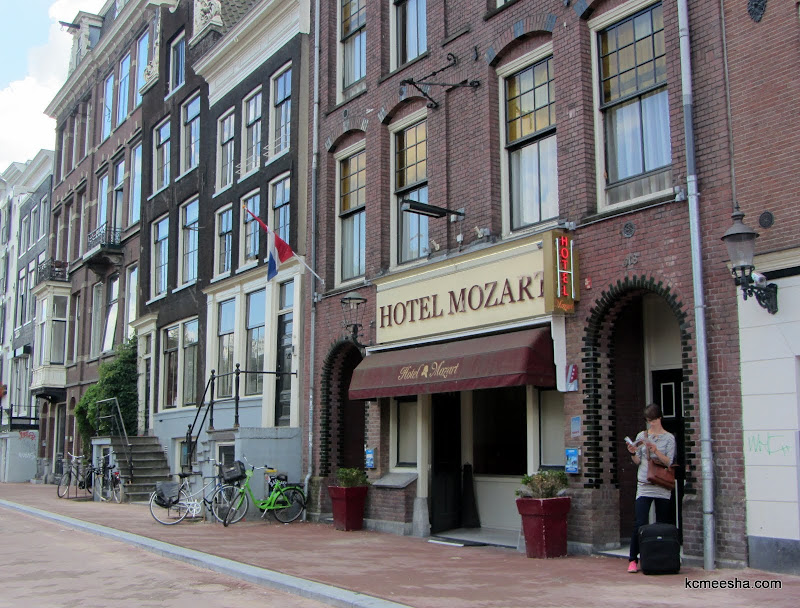 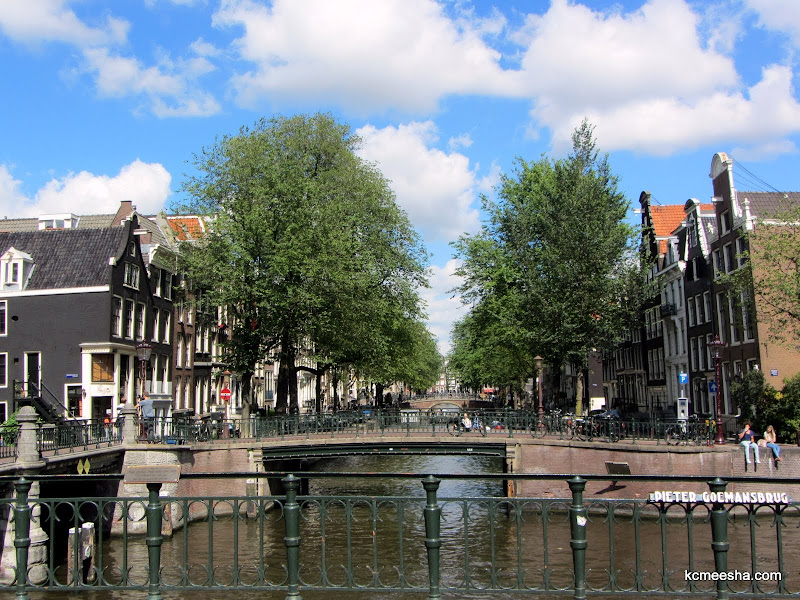 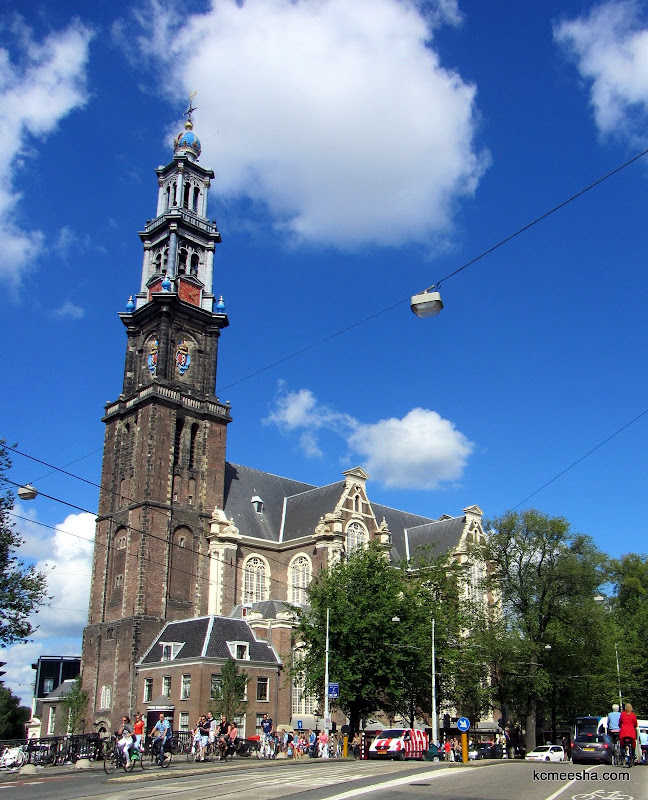 I asked about a comedy club at the Gay and Lesbian Info Kiosk, but the guy there probably found my question not gay enough and waved us out of there. Or maybe he tried to warn us not to go there. 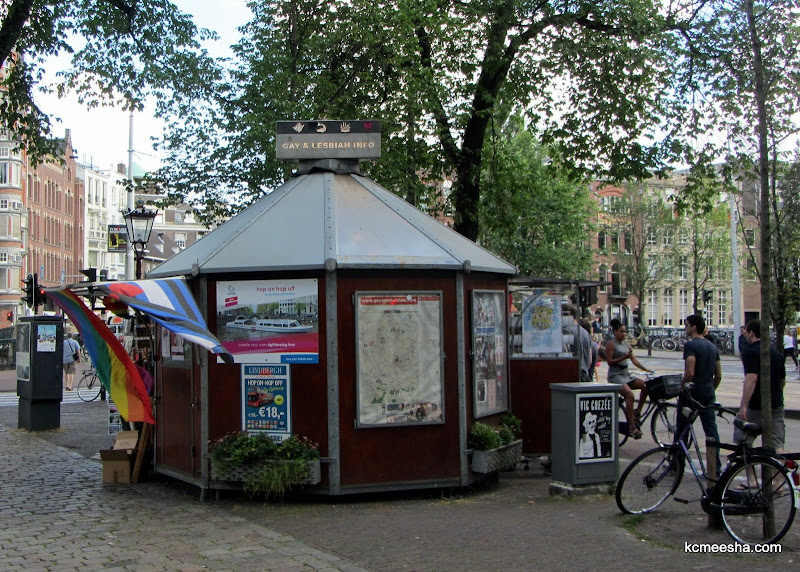 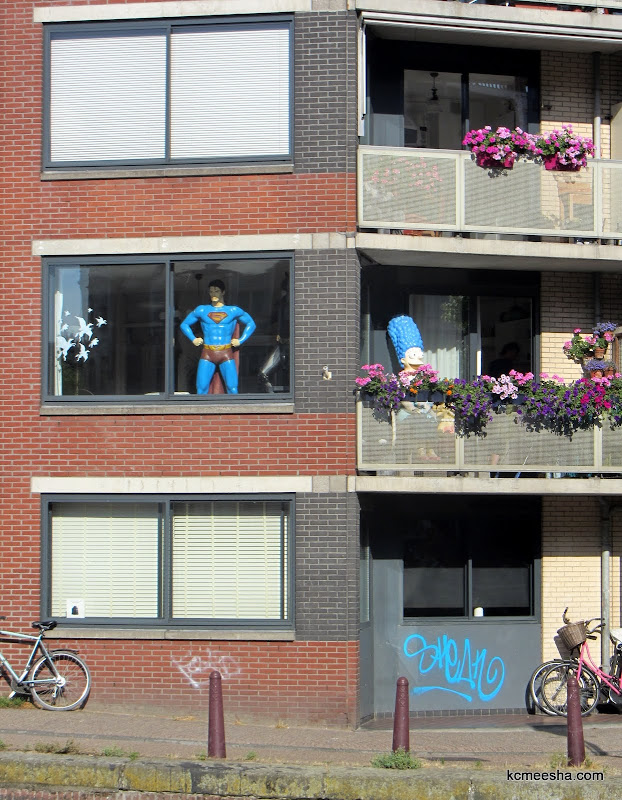 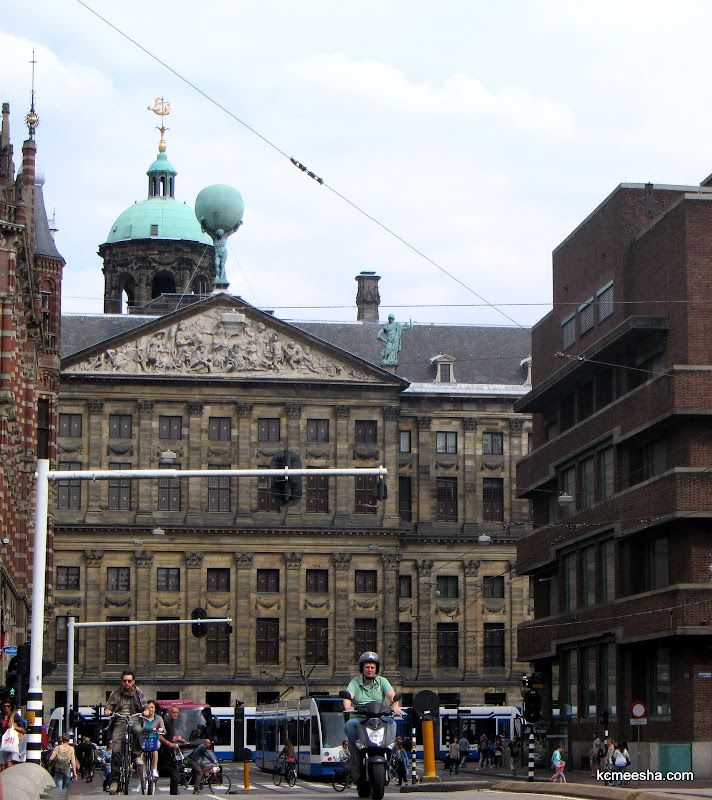 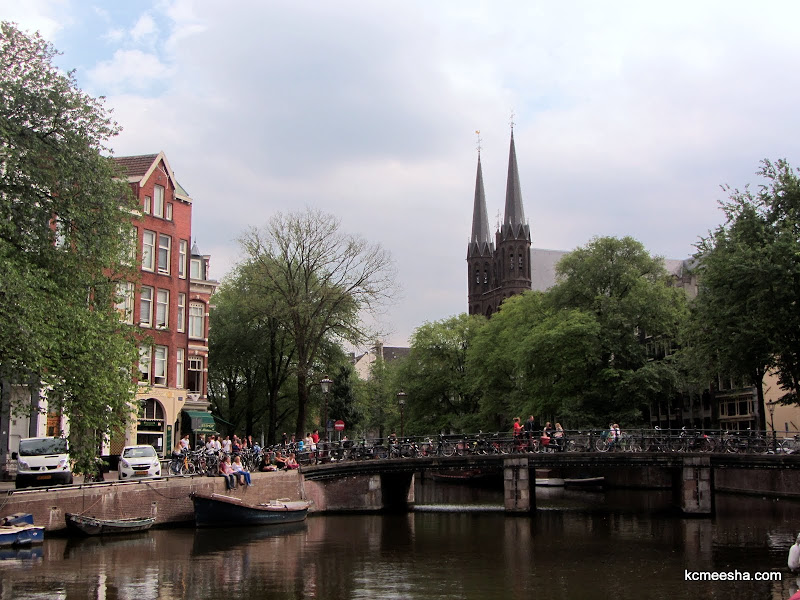 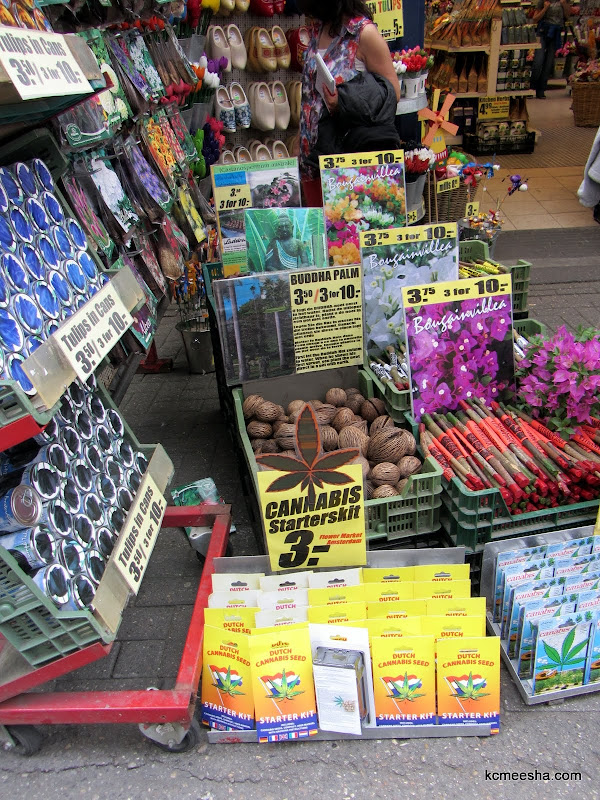 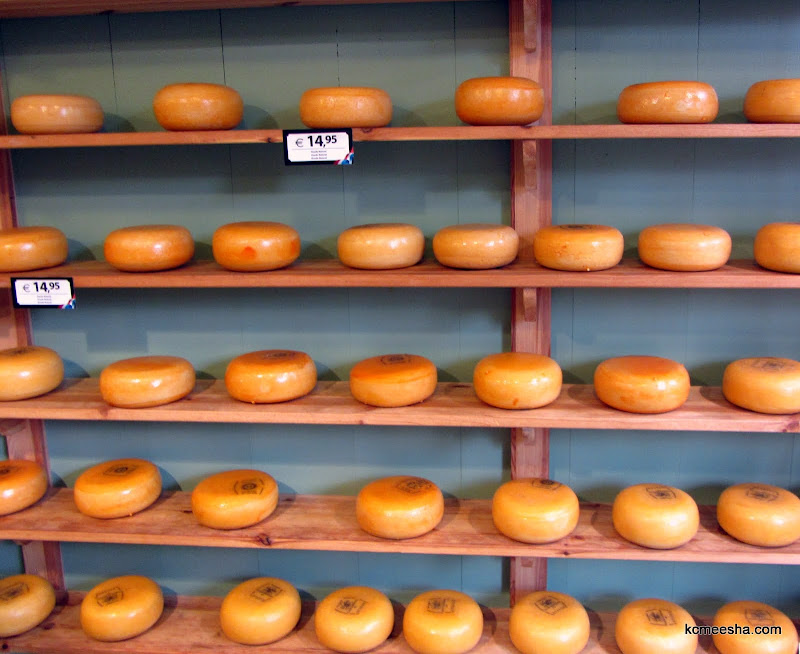 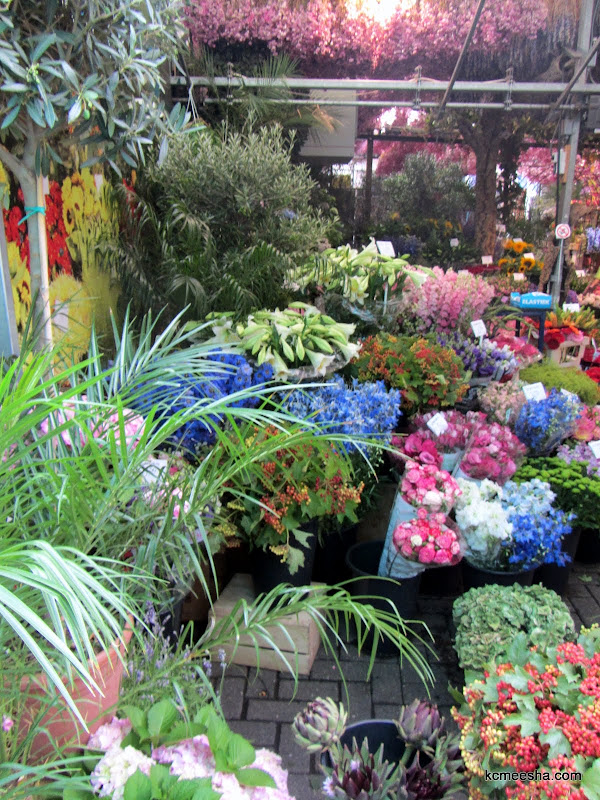 As a responsible parent of a 16-year-old I took my kid for a walk through the Red Light District, but I was told that picture taking is discouraged. As a teachable moment I mentioned that if she doesn’t study hard, she might end up in one of those windows.

On the way there, this building offered us assurances that Jesus still loves us. 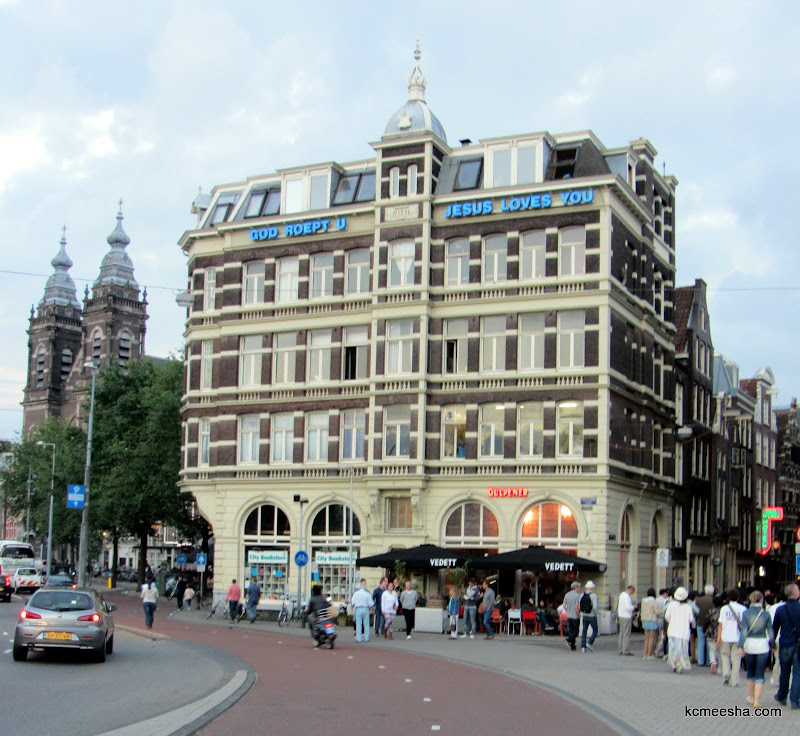 Even though Amsterdam has a great public transit system at the end of the day I felt like this. Besides a lot of walking around we took a bike tour, visited Van Gogh Museum, but were too tired to stand in a 2-hour long line to the Ann Frank Museum.

We loved Amsterdam, and we weren’t even high (that should be on a t-shirt).