On his visit Khrushchev had two requests: to visit Disneyland and to meet John Wayne, Hollywood’s top box-office draw. Due to the Cold War tension and security concerns, he was famously denied an excursion to Disneyland. He did, however, declare Iowa corn superior to Soviet corn.

On his California visit, the Soviet leader got a show of American consumerism and the American way of life. This marked the first time a Soviet leader set foot on U.S. soil. But he was annoyed that the main event of his first day was a lunch with 300 movie stars and other celebrities and a visit to the set of the movie Can-Can at 20th Century Fox in Los Angeles, rather than an inspection of an aerospace plant.

After Khrushchev left the studio, gawkers pasted tomatoes on his limo as the doubly offended leader and his 30-car, heavily guarded caravan made its way through city streets. Local authorities would later report that a bomb was planted in a tree along the route and that a man who said he was deer hunting was arrested on suspicion of carrying concealed weapons just moments before Khrushchev’s motorcade passed by a Los Angeles street.

Khrushchev declared himself offended by the chilly reception and even threatened to go home. “The thought sometimes — the unpleasant thought sometimes creeps up on me here as to whether perhaps Khrushchev was not invited here to enable you to sort of rub him in your sauce and to show the might and the strength of the United States so as to make him sort of … so as to make him shaky at the knees. If that is so, then if I came — if it took me about 12 hours to get here, I guess it’ll just — it’ll take no more than about 10 and a half hours to fly back.”

Khrushchev’s visit to Coon Rapids Farm in Iowa forever has changed the Soviet agriculture – upon his return home he insisted that corn is the answer to all of the problems which resulted in corn being planted everywhere from the Arctic Circle to the desert, sometimes when it couldn’t possibly survive. Khrushchev’s name is forever associated with corn in the Russian people’s memory. 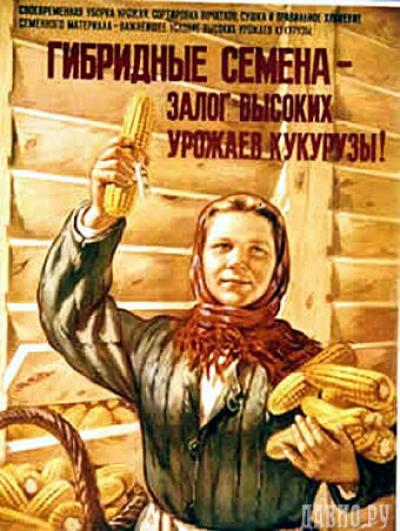